Challenges and Choices for the New Mayor: Preserving and Expanding Inclusive Housing

By:
Peter A. Tatian

Washington, DC, is a world-class, prospering city. But housing challenges are clouding its future and keeping some citizens from enjoying its new prosperity. The city’s population has grown dramatically over the past 15 years, increasing the demand for housing. To keep up, the city needs to build more housing and preserve existing affordable housing.

Rising demand has strained the supply of rental housing, with lower-cost units rapidly disappearing (figure 1). Assisted housing, a crucial safety net for low-income renters, is at risk of disappearing as neighborhoods redevelop and property values increase. The need is especially acute for renters with incomes at or below 30 percent of the area median. And much of the rental stock is aging: almost half of apartments are in multifamily buildings 50 years or older. Such old stock often requires reinvestment.

High prices have put homeownership out of reach for many first-time homebuyers. For example, a household supported by a full-time food service manager and a part-time office clerk, with an annual income of $75,000, could have afforded only 19 percent of the homes sold in DC in 2011. The same family could have afforded three-quarters of the homes sold in Wards 7 and 8, yet homeownership rates remain low in this part of the city: less than 25 percent of Ward 8 households own their home.

While DC has funding and tools available to address many of these challenges, the mayor needs to make sure that all those resources are effectively marshaled and that their use is aligned with citywide housing goals. The city had over $658 million (from both local and federal sources) in its fiscal year 2013 budget for housing programs and has many effective policies in place, including inclusionary zoning, the tenant opportunity to purchase act, local rent supplement program, and property tax credits. Nevertheless, while more than 14,000 affordable units are in development through 2020, that is not 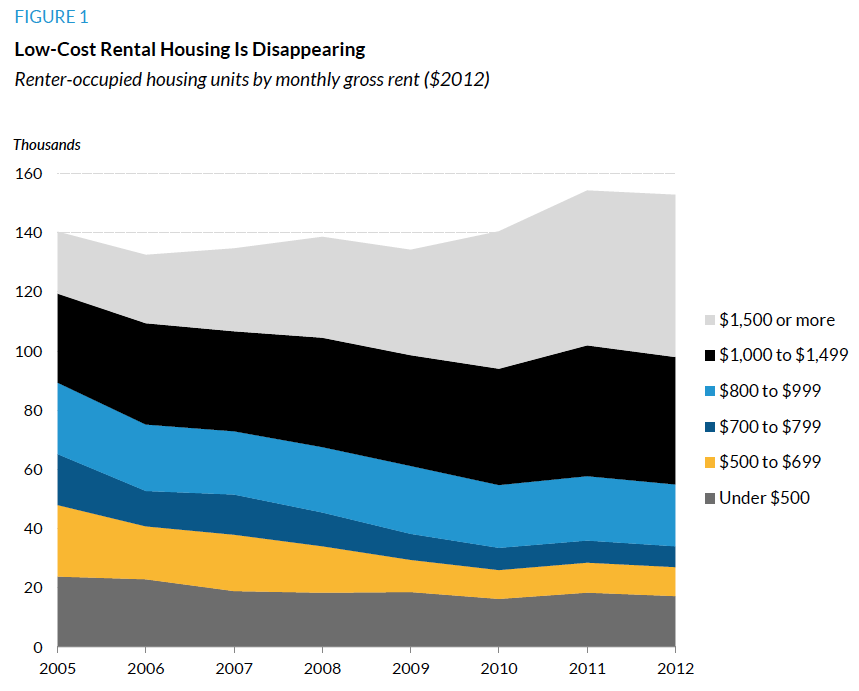 enough to cover even today’s affordable housing gaps. More resources may be needed, but is the city making the best use of what it has? In a survey of affordable housing developers in DC, 72 percent said that delays in receiving local funding significantly limited housing production; 60 percent said that difficulty in obtaining permits was an equally serious obstacle.

Finally, homelessness is an urgent challenge for the new mayor. DC’s homeless population is rising, largely from a growth in homeless families (figure 2).1 Lack of affordable housing for the lowest-income renters is a key factor in this increase. In addition, chronically homeless people need housing with supportive services to help them stabilize their situations, and such units are in short supply. 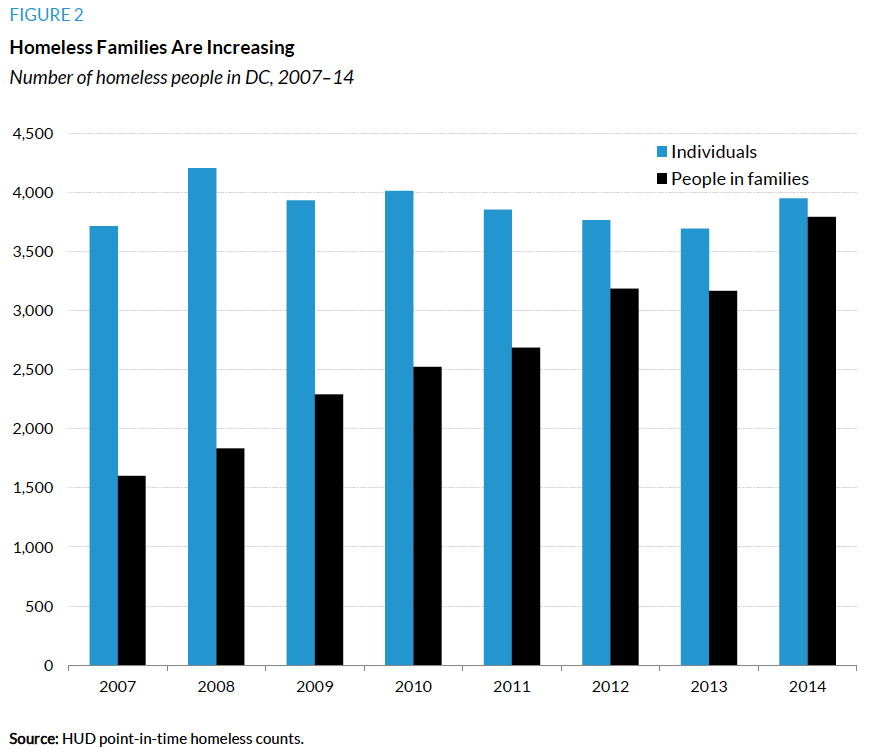 The mayor can take a number of steps to respond to these issues. Recommendations in this memo are organized around three key challenges:

The high demand for housing means the city must increase the supply of market-rate and assisted housing by producing more units at different affordability levels and preserving existing affordable housing. The mayor and her administration should expand the resources and tools available to support housing development.

While DC has limited space for new development, the mayor can support expanding opportunities to create new housing of all types throughout the city.

While more resources and new tools may be needed to increase residents’ access to affordable housing, the mayor can also improve planning and strategic use of what is currently available to ensure that resources are used effectively and aligned with key goals.

The administration may also need to reform and modernize parts of the housing system to improve their effectiveness and efficiency.

During her campaign, the mayor committed to ending homelessness in DC by 2025.3 She should take short- and long-term actions to help the homeless this winter and eventually eliminate homelessness.

The mayor should also pursue these longer-term actions to reduce and eventually end homelessness.

Affordable housing has long been a challenge for many DC residents, but the extraordinary growth of the past decade has made it increasingly difficult for low- and even moderate-income households to find a home they can afford. These challenges, years in the making, will not be solved overnight. But the new mayor has a great opportunity to build on past progress and lead DC into the next decade with a renewed commitment to being an inclusive city for all Washingtonians.

1. The homeless numbers do not include homeless youth living by themselves, which is a very difficult population to count.
2. DC Official Code 2001 ed., as amended, §§ 42-3404.31–37, Subchapter IV-A. District's Opportunity to Purchase.
3. “End Homelessness in the District of Columbia by 2025,” position paper issued by Muriel Bowser for Mayor.

ABOUT THE URBAN INSTITUTE

The nonprofit Urban Institute is dedicated to elevating the debate on social and economic policy. For nearly five decades, Urban scholars have conducted research and offered evidence-based solutions that improve lives and strengthen communities across a rapidly urbanizing world. Their objective research helps expand opportunities for all, reduce hardship among the most vulnerable, and strengthen the effectiveness of the public sector.

Funders do not determine research findings or influence scholars’ conclusions. Urban scholars and experts are independent and empowered to share their evidence-based views and recommendations shaped by research.