Exclusionary zoning policies restrict housing supply, drive up costs, and perpetuate the racial and economic disparities that lead to unequal access to opportunity. Although zoning touches a wide range of critical policy issues, we remain relatively uninformed about its basic building blocks and their impacts.

To inform better zoning policies, we need better data. Data science can help unlock these data, as our work at Urban shows.

Last summer, we used machine learning to predict zoning density limits in Washington, DC. This summer, we conducted follow-on research to determine whether this approach would apply to other jurisdictions. Our results are promising, but more work remains to demystify zoning.

Why don’t we have better zoning data?

The authority for zoning and land-use regulation in the United States rests largely with local governments. Because these regulations are mostly under local control, so are the data describing them. These data are often locked away in the complex text descriptions of zoning ordinances. Parsing these documents and interpreting zoning codes—actually understanding the nature of what, where, and how much can be built in an individual zone—requires significant time and background knowledge.

As a result, no current, comprehensive, and comparable national database of zoning limits exists.

How can we use machine learning to predict zoning limits?

Our machine-learning approach attempts to use information about zones’ underlying properties to predict permitted density limits. This approach has the potential to create a first-of-its-kind national database of zoning restrictions, empowering researchers, policymakers, and communities.

Machine learning involves feeding data and answers to a model, letting the model learn a set of rules to infer those answers from those data, and then applying those rules to unseen data.

Here, our data are characteristics of properties in a zone, such as the size of the average lot or the most recent year in which residences were built. Our answers are the permitted density limits for each zone, manually coded from local zoning ordinances.

We then asked two questions:

Can a model learn rules to predict density limits from property assessment data?

The answer to the first question is yes. Our model learned rules that predict density limits fairly well within a jurisdiction (if you’re interested, you can read our full technical appendix). When our seen and unseen data are both zones in Washington, DC, our predicted limits are really close to the actual allowed density limits across the city. 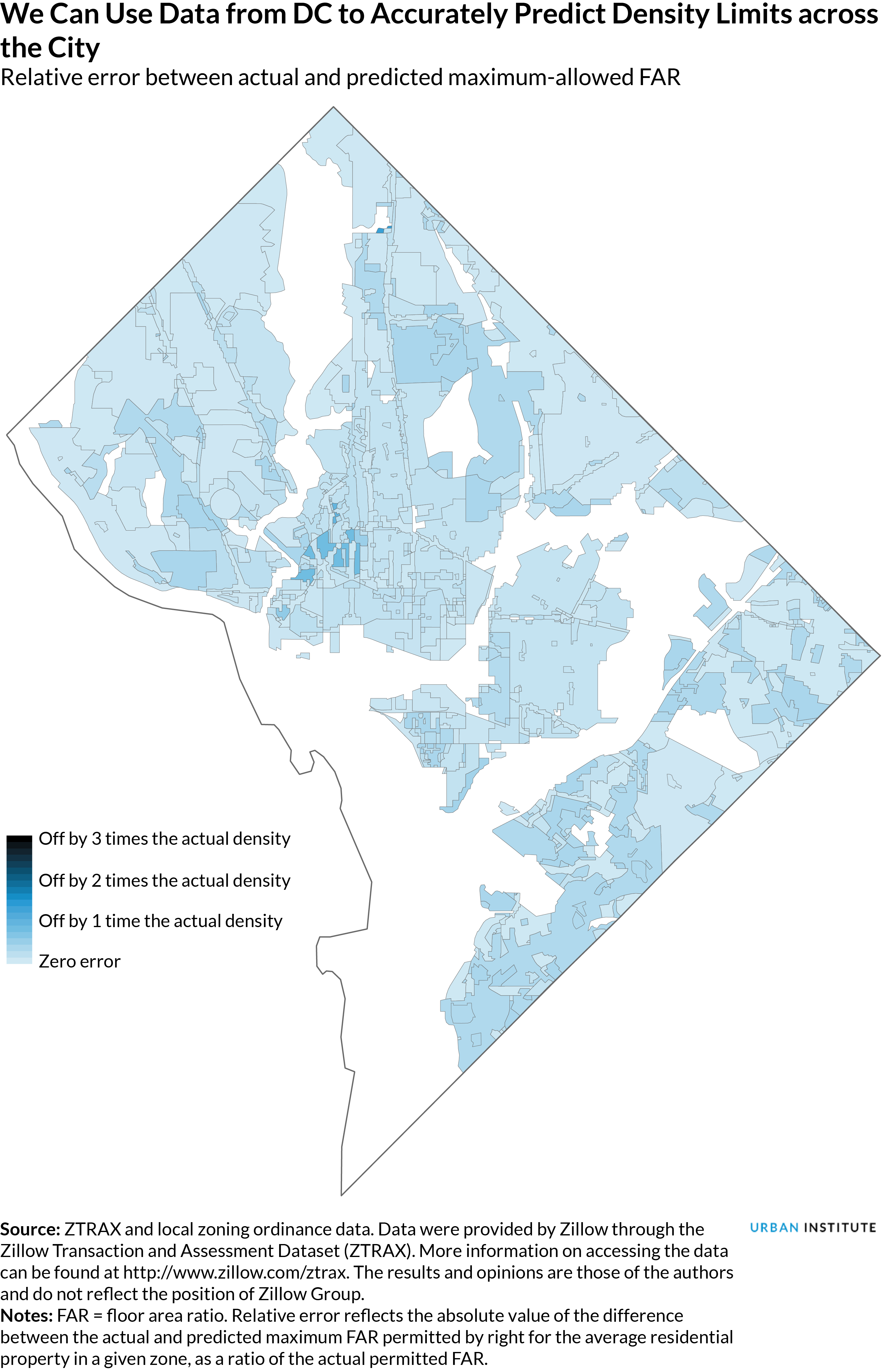 This first result is promising. We fed our model data from fewer than a hundred zones, and it produced a set of rules to accurately predict density limits.

But to create a national dataset with this approach, we’ll need to understand how our model performs when our unseen data don’t come from the same jurisdiction as our seen data (the crux of our second question). By understanding the types of zones that our model can’t yet accurately predict, we can refine our approach with these gaps in mind.

In both cases, we can generally predict zones with a large number of residential properties and zones that “look like” zones in DC.

But in zones the model has little experience with, we observe more error. In Montgomery County, for example, our model predicts higher densities in rural zones than actually exist—in this case, it predicted more than twice the actual densities in the county’s Agricultural Reserve and Rural Cluster zones. 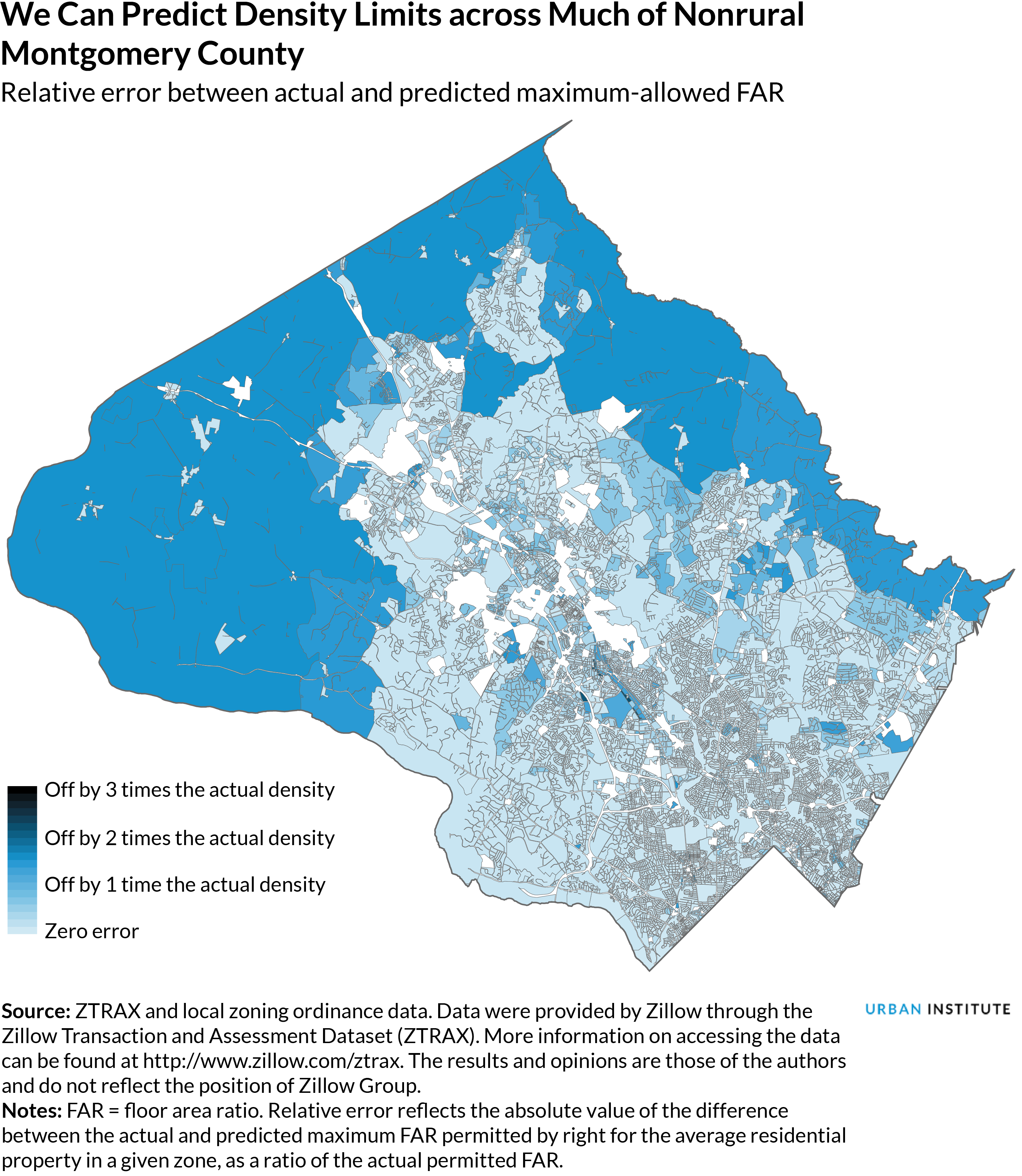 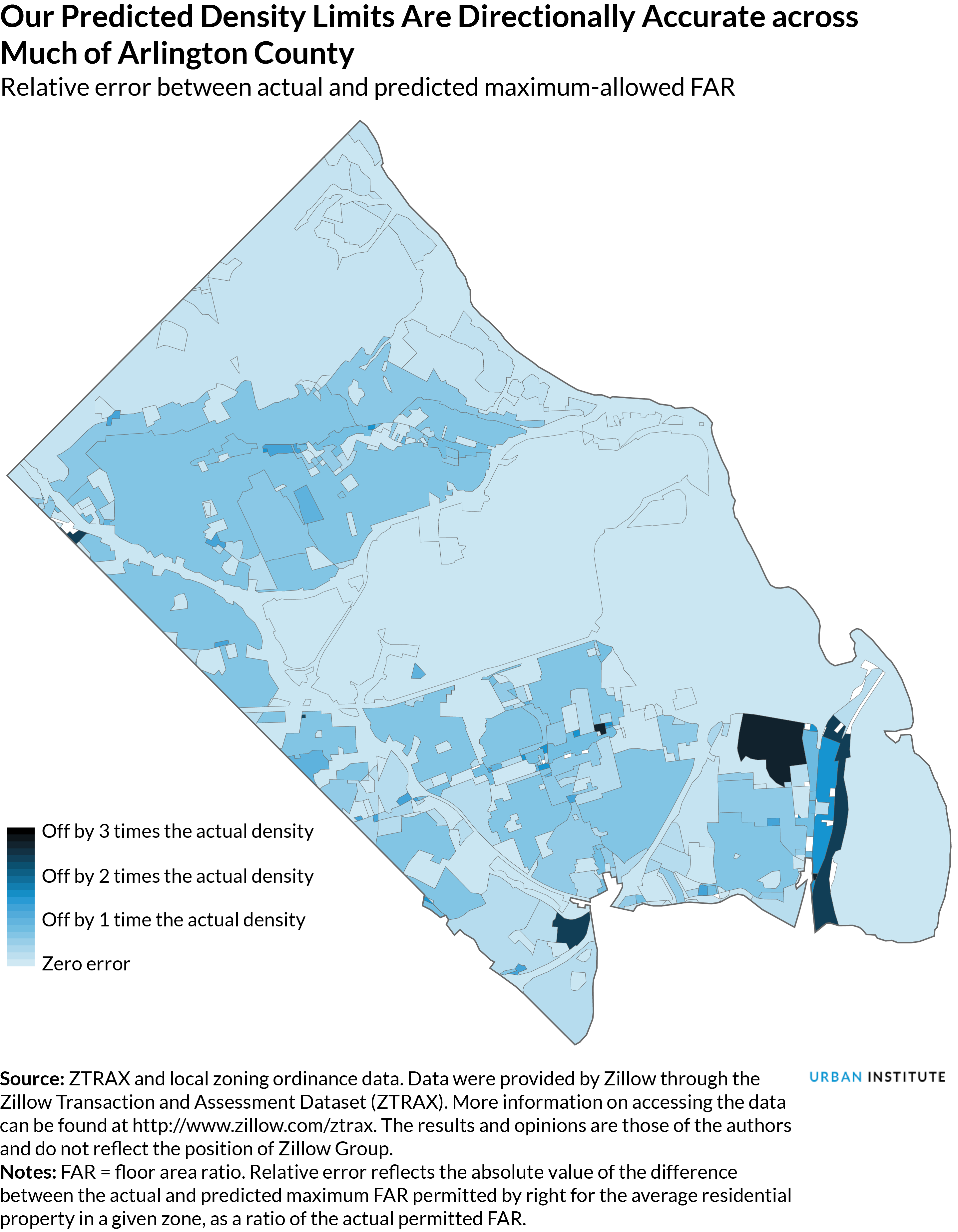 What are our next steps?

Our approach has promise. But to move forward on a broader scale, we need help.

First, we need more local jurisdictions to release open and structured geospatial zoning data. Ideally, these data would also contain relevant zoning restrictions. At the very least, we need data on where zoning boundaries lie within municipalities for our machine learning process.

Our model tended to predict higher densities in Montgomery County’s rural areas and Arlington’s commercial areas than were specified in the code. Feeding our model information from more diverse zones will likely help it make predictions as it encounters new built environments.

Our model also tended to predict higher densities than are allowed in the zoning code in areas where we believe developers may take advantage of optional methods to achieve higher density limits. By better understanding the zoning-to-development process—and finding ways to capture this nuance in a generalizable way—our approach can produce a more accurate and meaningful picture of zoning data.

Communities are realizing that reforming their local zoning policies is necessary to addressing housing affordability. By using innovative approaches to unlock zoning data, we hope to build the evidence needed to inform policies that create stronger and more equitable communities.