Commonly cited walkability metrics like Walk Score usually reduce walkability to one attribute: proximity to key destinations like schools, transit, work, and retail. Although these metrics are important for identifying mechanisms to improve quality of life and pointing out inequities in access for people of different backgrounds, none provides a holistic examination of walking, which covers not just where you are going but also if your neighborhood is safe, equitable, and enjoyable to walk through.

To address this gap, we developed a new tool that examines multiple measures of the walking experience in Washington, DC, including access to key destinations, environmental quality, infrastructure conditions, safety measures, and likelihood of being stopped and frisked by the police. These measures provide more comprehensive indicators of pedestrians’ actual experience and demonstrate that different areas of the city have varying improvement needs.

The road safety crisis has worsened in DC

Despite vocal support from the mayor’s office and a commitment to increase Vision Zero spending on road safetyimprovements, fatalities on DC streets have increased steadily over the past few years. Fatalities increased by almost 50 percent for all road users—including drivers, pedestrians, and cyclists—between 2019 and 2021, and 40 people were killed in crashes last year, according to city data. So far, data for 2022 indicate this trend continues.

Pedestrians in particular have been negatively affected by this rise in vehicle-related fatalities. In 2021, 17 pedestrians were killed in car crashes—the most in at least a decade. And people of color are disproportionately affected, as neighborhoods with predominately Black residents, such as those east of the Anacostia River, experience an outsize share of the city’s traffic deaths. 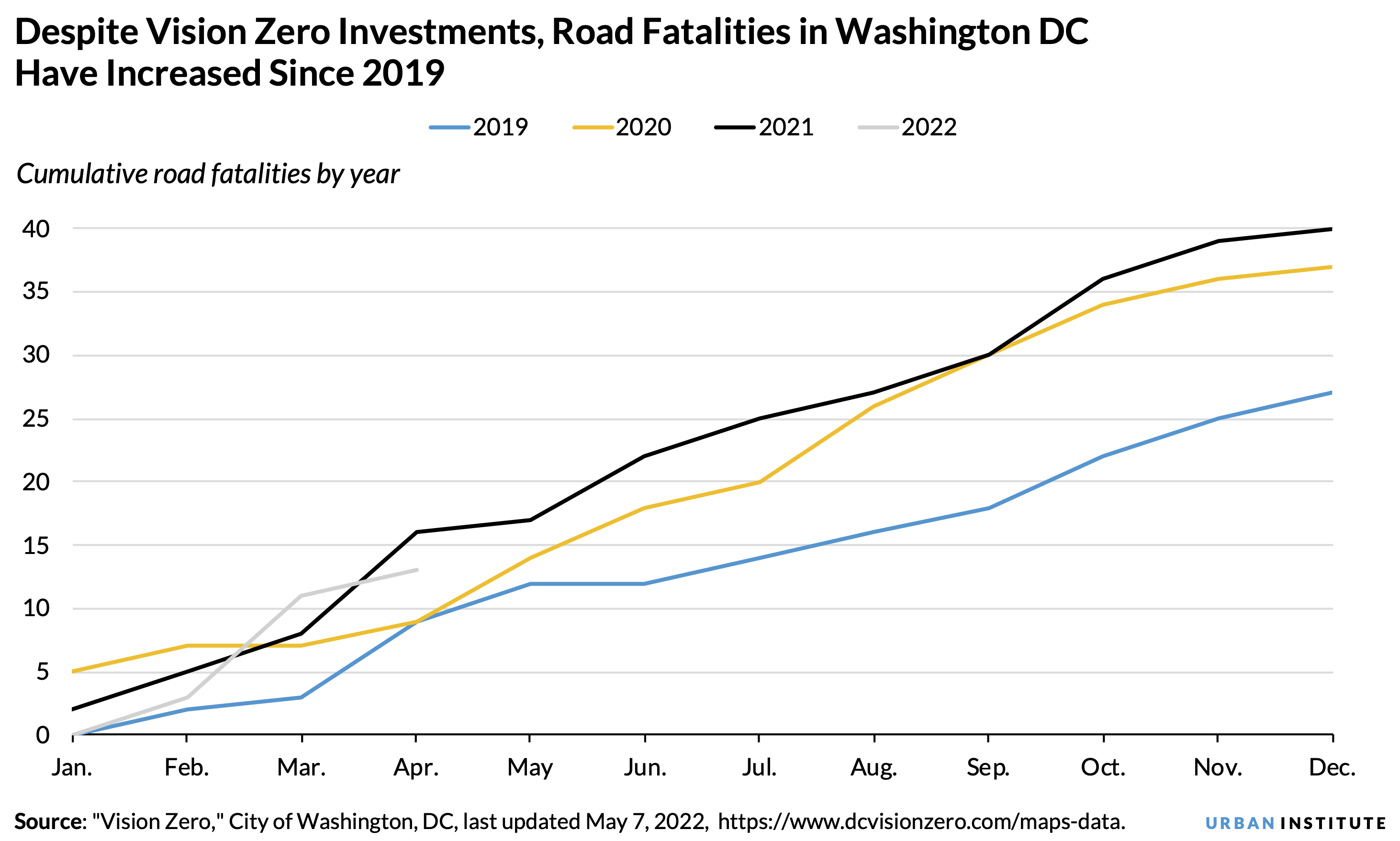 We had a series of conversations with activists and experts to inform our understanding of DC’s pedestrian safety landscape. Karthik Balasubramanian, an assistant professor at Howard University who has engaged with street safety efforts for years, spoke of his frustration with inequitable street design in DC. “I started to see that there are extreme differentials in fatalities and injuries by race, and that just pissed me off. We’re designing so much around the convenience of cars, and car movement, and car storage,” Balasubramanian said.

These concerns are shared by others who see improving pedestrian safety as a matter of public health. David Poms, who works for the DC Primary Care Association, told us, “I would say we have more to do to engage on this issue from a health care, social determinants of health side.” Balasubramanian also emphasized the growing urgency to change the status quo for pedestrians: “There have been some really, really sad deaths,” and believes people are becoming more aware of the situation’s severity.

A tool for measuring all of the elements of walking

In May 2021, Mayor Muriel Bowser announced plans for a major expansion in street improvements specifically designed to increase pedestrian safety. These infrastructure projects will improve pedestrian visibility, slow cars, and reduce crossing distances on high-traffic streets. Each of these changes will play a role in reducing roadway deaths.

But the walking experience goes beyond the threat of injury in traffic crashes. It also involves people’s general comfort level on sidewalks. How, then, can the city invest to ameliorate the pedestrian experience? And where should those improvements be focused?

To answer these questions, our interactive walkability tool also highlights priority neighborhoods with the largest proportion of residents who are people of color, who have low-incomes, or who have physical disabilities (we use these metrics collectively to calculate what we call the equity measure). These are all communities who have historically been discriminated against during the transportation planning process. We overlay these equity scores across five walkability indicators we collected from publicly available sources.

Access: We measure the degree to which people in different neighborhoods are within reasonable distance of destinations like retail, jobs, and schools.
Environment: We assess whether people are more likely to be exposed to higher temperatures, poor air quality, and lack of shade.
Policing: We determine how likely pedestrians are to be stopped by the police, such as for nonviolent offenses and stop-and-frisk processes.
Infrastructure: We combine information about sidewalk quality as reported by residents and information about street light coverage.
Safety: We identify neighborhoods that are exposed to high numbers of crashes as well as large, high-trafficked streets. 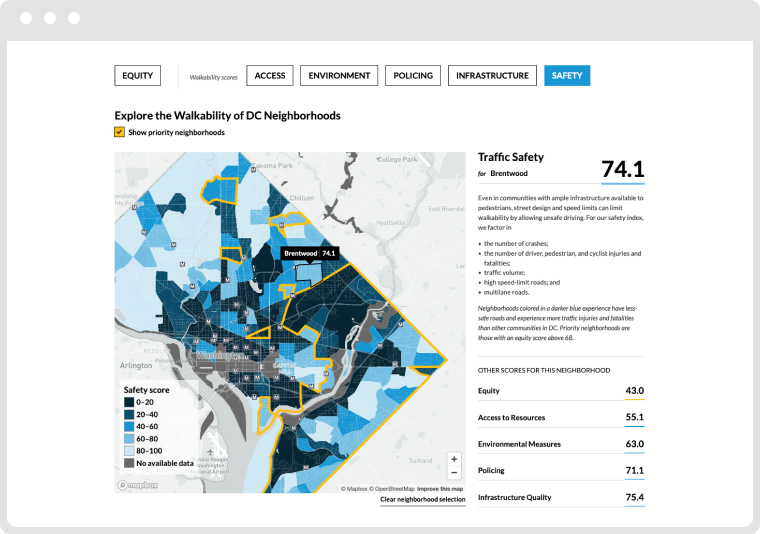 The metrics we developed can help address the varying elements of the pedestrian experience Balasubramanian and Poms highlighted. Our interactive map shows where in the city improvements might best be made for each category, and contextualizes these metrics within an unequal city, where racial segregation is commonplace and economic inequities are growing. We point to the neighborhoods where historic disinvestment has failed residents and has exposed them to a worse walking experience.

We find considerable differences in the walking experience between neighborhoods:

How policymakers can use this tool to target investments

Our interactive tool is just the first step toward improving walkability as an experience and reducing pedestrians’ exposure to unsafe conditions—especially for people of color.

Policymakers can target improvements to areas where walkers are particularly threatened and to neighborhoods where people who have faced historic disinvestment are concentrated. They can also consult with local stakeholders and pedestrian advocates to ensure investments reflect real needs.

We recommend policymakers address pedestrian priorities thoughtfully, depending on local preferences. That might mean expanding tree cover, supporting a more equitable distribution of public resources like libraries and parks, or prioritizing road designs that limit the need for police traffic enforcement.

The Urban Institute has the evidence to show what it will take to create a society where everyone has a fair shot at achieving their vision of success.