The Pandemic’s Disparate Effects on DC Workers and Neighborhoods

An earlier version of this post displayed the wrong source information for the maps (corrected 4/27/20).

What has felt like the longest and toughest month for many Americans is likely just the start of a long series of public health and economic battles. Workers in retail and hospitality, travel arrangement, transportation, and mining are among those most vulnerable to the direct impact of decreased demand because of social distancing measures and government restriction.

And just as risk varies by the geography and economic diversity of states and metropolitan regions, cities are seeing disproportionate affects across neighborhoods and demographic groups. Without assistance and relief programs that account for the disproportionate impact of the crisis, the economic shutdown will likely exacerbate existing income inequities.

Where do Washington, DC’s vulnerable workers live? To illustrate the geographic patterns of the workers most likely to face immediate unemployment and unstable income, I used the most recent (2017) Longitudinal Employer-Household Dynamics Origin-Destination Employment Statistics (LODES) Summary Residence Area Characteristics data for all primary jobs, excluding federal jobs. I then identified the number of jobs in recreation, food, and transportation—jobs likely at immediate risk. (More on my methodology.)

To capture primary jobs with lower incomes, I also looked at the jobs in those industries earning monthly salaries of less than $3,333, equivalent to an annual income of less than $40,000 and an hourly wage of $19.23, slightly higher than Washington, DC’s $15 minimum wage and the city’s living wage of $16.92.

In DC, the number of workers in vulnerable industries is distributed unevenly, with 10 out of 47 neighborhoods accounting for almost 50 percent of all vulnerable jobs.

Although the Columbia Heights, Mt. Pleasant, Pleasant Plains, and Park View neighborhoods (as defined by the DC Department of Planning) have the most absolute number of workers in retail, food, and transportation (more than 5,000), the 10 neighborhoods with the highest shares of vulnerable workers are all east of the Anacostia River in Wards 7 and 8.

Neighborhoods Where Workers in Industries Vulnerable to COVID-19 Live

Looking at workers in retail, food, and transportation who earn less than $3,333 per month, the lowest end of the income spectrum for these industries, some neighborhoods are home to more than 40 percent of workers whose jobs are at risk. 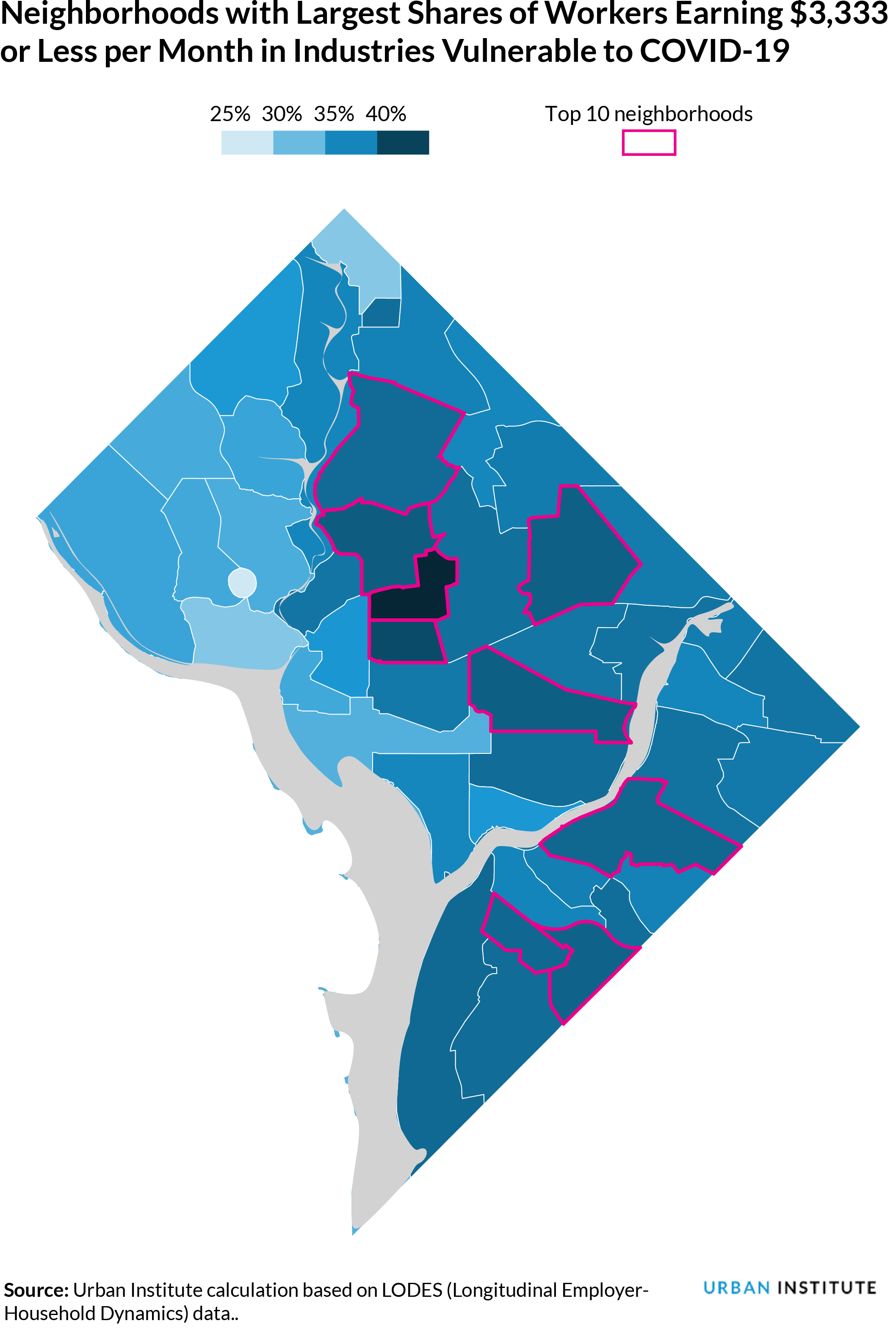 LODES data don’t include self-employed workers and independent contractors. Research has shown persistent misclassification is a huge problem in the hospitality and food service industries and among gig economy workers, with millions of workers classified as independent contractors when they are not actually running their own businesses and are working without unemployment insurance (UI), paid sick leave, and other benefits.

We don’t know yet how many of those jobs were lost in the past five weeks or how many will be lost eventually, let alone when (or if) those jobs will come back. But recent job loss data from the Washington State suggest employment in food and accommodation industry dropped more than 30 percent. UI claims during the week ending March 28 marked the highest on record, at 6.867 million (PDF), and total UI claims exceeded 26 million since the outbreak.

What are the policy solutions for DC and other cities?

Helping businesses, especially small businesses and their employees, survive the economic burden will be crucial. The Coronavirus Aid, Relief, and Economic Security Act (CARES) Act expands federally backed loans through the Small Business Administration (SBA) 7(a) loan guaranty program (money now exhausted), eases eligibility requirements for UI, and provides direct cash payments. But there are gaps in UI systems for low-wage and intermittent workers, and systems exclude many who have been unemployed long term.

Compared with the DC average, Wards 7 and 8 have higher shares of renters and rent-burdened residents and higher African American populations. According to a survey by the Office of Deputy Mayor for Planning Economic Development (PDF), about 20 percent of residents in Wards 7 and 8 anticipate being unable to afford their homes.

Although the CARES Act includes an eviction moratorium for certain types of public housing and the Superior Court of the District of Columbia suspended all evictions through May 1 (PDF), the pandemic’s economic effects won’t stop when the moratorium is lifted. Unlike homeowners, who can defer mortgage payments if needed as part of the stimulus package, renters have fewer protections in terms of housing stability, and only one in four rental units are covered by the CARES Act’s eviction moratorium. Many workers will still be struggling and catching up on payments and could face eviction.

Earlier this month, the DC Council passed an emergency relief bill, but more can be done to address the virus’s impact on different communities and develop recovery programs that could help.

What about other communities?

To understand where support is most needed nationwide, we recently released a data tool to illustrate the immediate impact on low-income workers by industry. Explore how your community might be affected.