As Tax Policy Center analyses have shown, the Tax Cuts and Jobs Act (TCJA) treats people of similar incomes in very different ways, depending on various personal characteristics including where they live. To highlight these varied effects, we looked what will happen to federal income taxes to people in nine jurisdictions within 40 miles of the Capitol: Washington, DC; Baltimore, Frederick, Howard, Montgomery, and Prince George’s counties in Maryland; and Arlington, Fairfax, and Loudoun counties in Virginia.

For 2018, we found that for low-to-middle income households that take the standard deduction, their location within the region makes little difference. They’d all get a tax cut of roughly $1,000. But there are significant differences in income tax liabilities among households that make between $100,000 and $200,000 and who traditionally have claimed itemized income tax deductions. Their average tax cuts will range from $1,841 in DC to $870 in Montgomery County and only $28 in Prince George’s County.  The key driver: The size of each household’s claimed itemized deductions under pre-TCJA law. 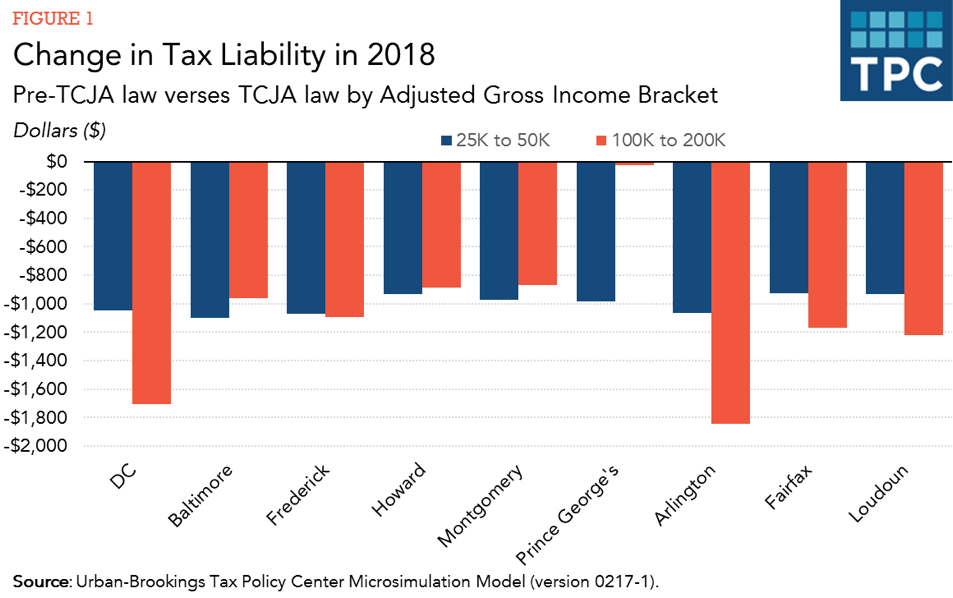 To compare the TCJA across these jurisdictions, we created hypothetical couples with one wage earner and two children using county-level IRS data. We gave the working spouse a wage to equal the average AGI in the family’s county for the category chosen (either $25,000-$50-000 or $100,000-$200,000). We assumed that households with income below $50,000 take the standard deduction and those in the $100,000-$200,000 range itemized deductions under the pre-TCJA law. We based their itemized deductions on household averages in this income group using 2015 IRS data.

The TCJA made many changes to the individual income tax. It lowered tax rates, almost doubled the standard deduction for all filer types, eliminated personal exemptions, increased the size of the child tax credit, and capped the allowable itemized deduction for state and local taxes (SALT) at $10,000, among other changes. It also made substantial modifications to corporate income taxes and the taxation of pass-through businesses, but our analysis did not include those changes.

In 2018, families with annual incomes of $25,000-$50,000 who take the standard deduction see very similar reductions in individual income tax liability under the TCJA, mainly because there is little variation in average AGI for this group across counties. They’d experience a modest income tax cut in 2018 (in reality, an increase in refundable tax credits) and a modest income tax increase in 2027.

The variation is much greater for taxpayers with annual income between $100,000 and $200,000. Generally, households in the Maryland counties tend to benefit less from the TCJA than those in Virginia largely because Maryland has higher combined state and county taxes and the deduction for those taxes is capped under the TCJA. The result for Prince George’s County highlights a more nuanced outcome – all else being equal, the more itemized deductions you took under the old law, the less the new law benefits you, because you are likely to lose more benefits of itemizing.

Here’s why: The TCJA raises the standard deduction for joint filers to $24,000. Thus, the closer a taxpayer’s itemized deductions were to $24,000, the less they’d lose from the cap on the SALT deduction and other changes that shift them to the standard deduction. Thus, residents of DC, with pre-TCJA itemized deductions of $25,780, lost relatively little from these provisions of the new law, while benefiting from lower income tax rates and other provisions. This same pattern is true for Baltimore, Fredrick, Howard, Montgomery, Fairfax, and Loudoun counties, though to a lesser extent. 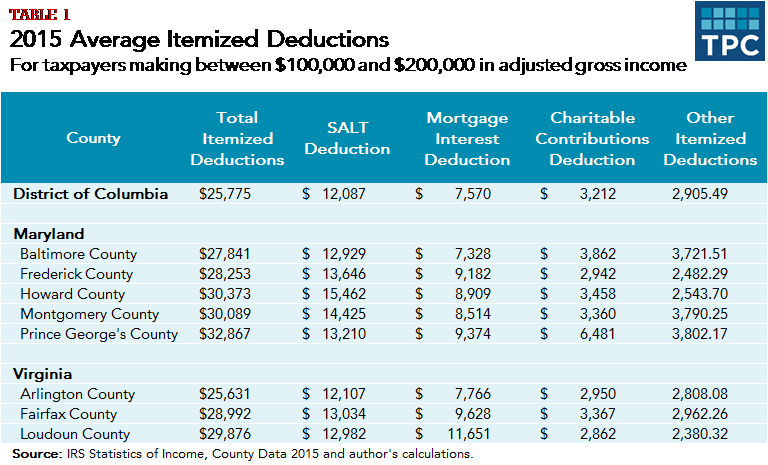 In Prince George’s County, however, itemizers deducted an average of $32,870 prior to the TCJA. While county residents had lower levels of SALT deductions than other Maryland counties, they had roughly twice the amount of deductible charitable contributions.

As a result, our hypothetical Prince George’s family will still itemize, but their claimed itemized deductions drop from $32,867 to $25,916. That means their taxable income is much higher than under pre-TCJA law and their tax savings is smaller, assuming they don’t adjust their charitable giving in response to the new law.

Our experiment shows how much differences in where people live and how they spend their money can affect how much their income tax bill will change under the TCJA, at least for 2018. In what locals like to call the DMV—DC, Maryland, and Virginia—just a few miles can mean all the difference.