Housing Is Hindering the Greater DC Region’s Prosperity. A New Tool Could Help.

By:
Peter A. Tatian, Leah Hendey

A vibrant, equitable region needs housing that serves everyone. But the greater DC region has a constrained supply that, along with recent population growth, has pushed up rents and home prices. These trends have exacerbated displacement of people with low and moderate incomes and people of color from their communities. Ignoring these trends could hinder the region’s growth and prosperity.

Setting and achieving goals to shrink the affordability gap and produce more housing will be key. A new tool launched by Housing Association of Nonprofit Developers (HAND) could help. The Housing Indicator Tool (HIT) is a dashboard for measuring progress toward regional housing needs, and HAND believes it will be key to addressing racial and economic inequities in the greater DC region. As HAND executive director Heather Raspberry commented when introducing the HIT, “More than ever, affordable housing is critical to the health and well-being of our neighbors.… Once equipped with the knowledge of where we stand in each jurisdiction, we can effectively pivot to increase the housing supply and create a more equitable region.”

Several hundred HAND members, including those from local governments, philanthropies, private companies, financial institutions, and community-based nonprofits engaged in affordable housing development across the Baltimore, Washington, and Richmond regions, attended the launch event, highlighting the role all sectors have in advancing the region’s housing needs.

The HIT will track the progress of the 10 jurisdictions in the Metropolitan Washington Council of Governments (MWCOG) toward numeric housing production targets over the next 10 years. The tool also reports whether jurisdictions have established specific local policies to promote more affordable and equitable housing, such as adopting inclusionary housing policies or creating a local housing trust fund. 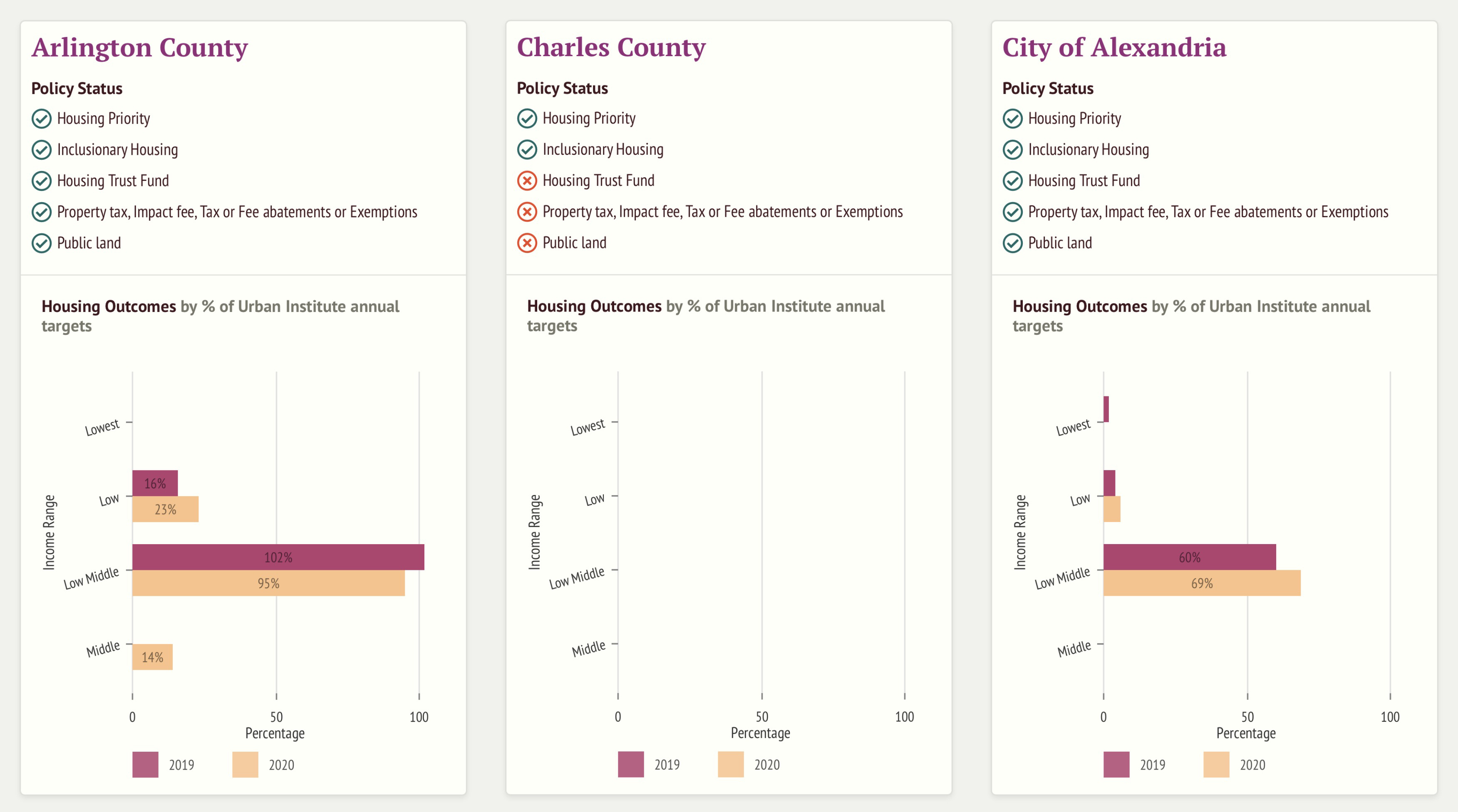 The HIT’s production targets are adapted from an Urban Institute report that documented the current and future housing needs in the greater DC region. Starting with the MWCOG cooperative forecast of population growth, Urban projected increases in households through 2030 by age, race, and ethnicity of householders and by household income. Based on these projections, we estimated the region would need 374,000 additional housing units to accommodate that growth, including 67,000 more units that cost less than $800 a month and 74,000 more units that cost between $800 and $1,200. We also found that every jurisdiction needed to increase housing production in all cost bands.

Urban–Greater DC will continue to work with HAND and other partners to use the HIT to monitor the region’s progress.

The cost of inaction

Not committing to progress means higher housing costs and leaving parts of our region without the housing the people who live and work here need and deserve. The ability of employers to attract, retain, and develop a diverse workforce depends on the availability of housing that fits a variety of household types, lifestyles, and incomes. High housing costs and housing supply shortfalls limit who can afford to move into a region and can displace lower-wage workers who already live here. And not building housing costs the region jobs. The National Association of Home Builders (PDF) has estimated that building 100 rental apartments can create 161 jobs during construction and 44 additional jobs once the units are occupied.

In addition, exclusionary and racist policies, both past and current, have prevented people of color from sharing fully in the region’s prosperity. Practices such as redlining and systemic disinvestment have denied communities of color the capital needed to grow and thrive. Inequitable access to mortgage credit has prevented Asian, Black, and Latinx households from building wealth through homeownership, and subprime lending in the 2000s extracted home equity wealth from these same communities. Restrictive land use along with outright discrimination have excluded people of color from opportunity-rich communities. Adopting more explicit affordable housing goals, along with a clear understanding of regional fair housing challenges and intentional strategies to redress the harms caused by discriminatory housing practices, will give our region a historic opportunity to correct an unjust past and create a more equitable future.

Housing is the missing ingredient to our region’s prosperity and is the smartest investment we can make in its future. Meeting the housing challenge will be hard. But jurisdictions have a variety of tools available to help them, and everyone has a role to play. In addition to providing essential funding for affordable housing development, such as through housing trust funds or equitable transit-oriented development funds, local governments can use their regulatory authority and convening power to create opportunities for affordable housing development and to focus attention on the need for more housing. Businesses and philanthropies should deploy their influence to build and sustain commitment to action. By being proactive about how, where, and how much housing gets built in our region, together we can create a region where everyone prospers.

The Urban Institute has the evidence to show what it will take to create a society where everyone has a fair shot at achieving their vision of success.

What Could Stronger Rent Control Mean for DC Residents?

The COVID-19 pandemic and the ensuing economic fallout continues to drain families’ resources.