Amid the Omicron COVID-19 surge, the debate over school operations has been intense. Unresolved disputes over safety in Chicago, New York City, Oakland, and San Francisco have led to class cancelations. Schools and districts across the country are shifting to temporary remote instruction. “It’s chaos,” Keri Rodrigues, president of the National Parents Union, told the New York Times.

But one school district has managed to avoid the worst of the reopening debate with an unparalleled COVID test-to-return program. District of Columbia Public Schools (DCPS) required all staff and students to provide proof of a negative COVID test before returning from the holiday vacation on January 6. With student learning and family well-being on the line, it helped all but one DC school reopen.

Now that the Biden administration has announced increased testing availability, what can other school districts, and the state governments that support them, learn from the DCPS test-to-return program?

How can other school districts mobilize large-scale, transparent testing programs? Proactive test distribution is key. DC distributed (PDF) 100,000 rapid antigen tests to DCPS and DC public charter school staff and students for reopening. Free tests were also distributed through public libraries, and families could choose which test to use in satisfying the DCPS requirement.

Outreach and support also boosted participation. DCPS closed schools for a day and a half of test distribution, and the district, school leaders, teachers, and other staff provided multiple reminders and assistance both virtually and in-person.

Families that had trouble submitting results could bring their tests with them to the first day of school. Test results were verified before students entered their classrooms. And students who were not tested by the first day back could be tested outside their school buildings, bringing participation rates well above 80 percent.

A testing program of this scale is no small feat. It did not reach everyone. But it met the request of the Washington Teachers’ Union and allowed thousands of students and staff a safer return to school.

2. Staffing shortages are the greatest challenge for reopening

So, what did the test results show? Two key findings stand out. First, test positivity was higher among staff than students. Among staff submissions, 7.3 percent were positive, compared with 5.6 percent for student submissions. Both rates are high, but the difference lines up with other evidence that staffing shortages—including teachers, bus drivers, substitutes, and cafeteria workers—are the greatest challenge for reopening. More qualified adults are needed to keep schools running so those who get sick can stay home, get care, and stem the spread of the virus.

Second, within each school, staff and student positivity are not well correlated (0.16). Some schools with high shares of positive staff had low shares of positive students, while others had the opposite. This mismatch could mean that well-staffed schools have few students on a given day, while other schools are struggling to find enough teachers to serve attending students. There are no easy fixes for this problem, but temporary hybrid and other flexible teaching models may offer solutions. 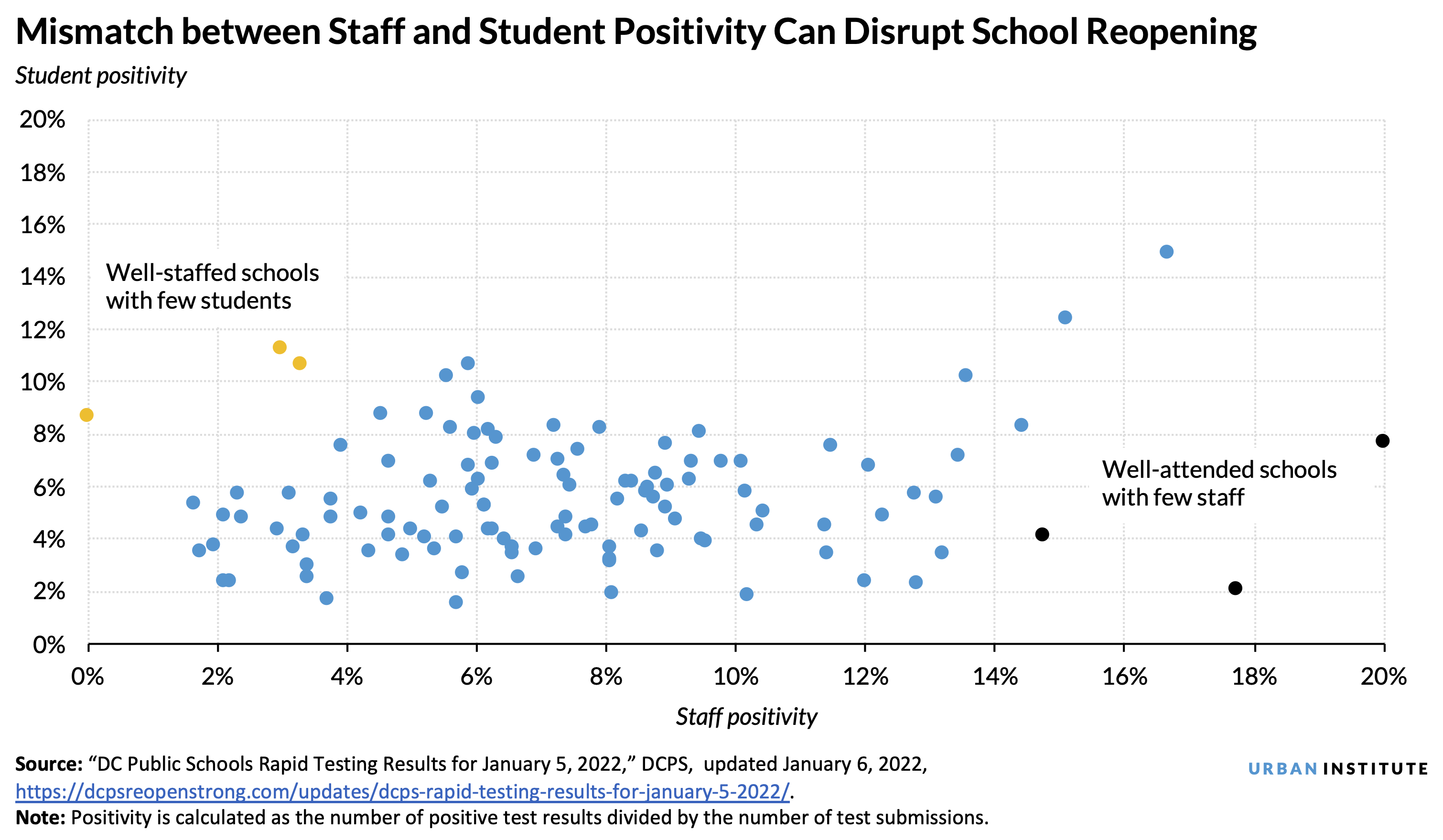 3. Elementary schools and schools in select communities are harder hit

The pandemic’s effects have not been borne equally, and DCPS test results mirror this trend. Early learning centers (which offer public prekindergarten to 3- and 4-year-olds) and elementary schools (which offer prekindergarten through fifth grade) had the highest rates of student positivity (7.2 percent and 5.9 percent). Elementary schools also had the highest rate of staff positivity (8.2 percent). Younger children were the last to receive authorization for COVID vaccines, and 3- and 4-year-olds are still unable to be vaccinated. 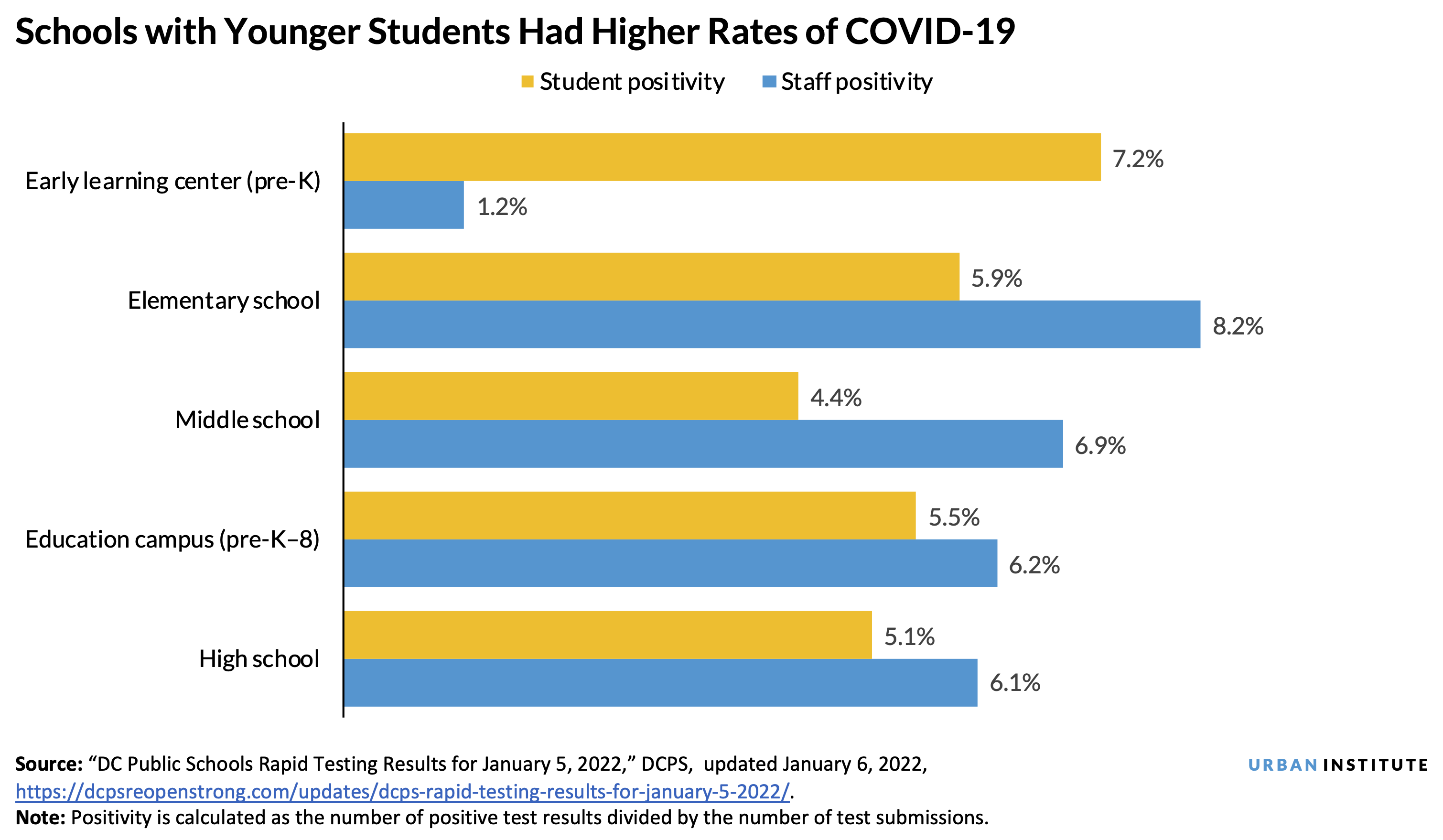 A separate analysis by Jonathan Rothwell found that schools with higher shares of Hispanic or Latino students, but not higher shares of Black students, had higher rates of student positivity. These findings reflect social determinants of health, such as crowded housing and higher numbers of adults working in person in DC’s low-income Latino communities. 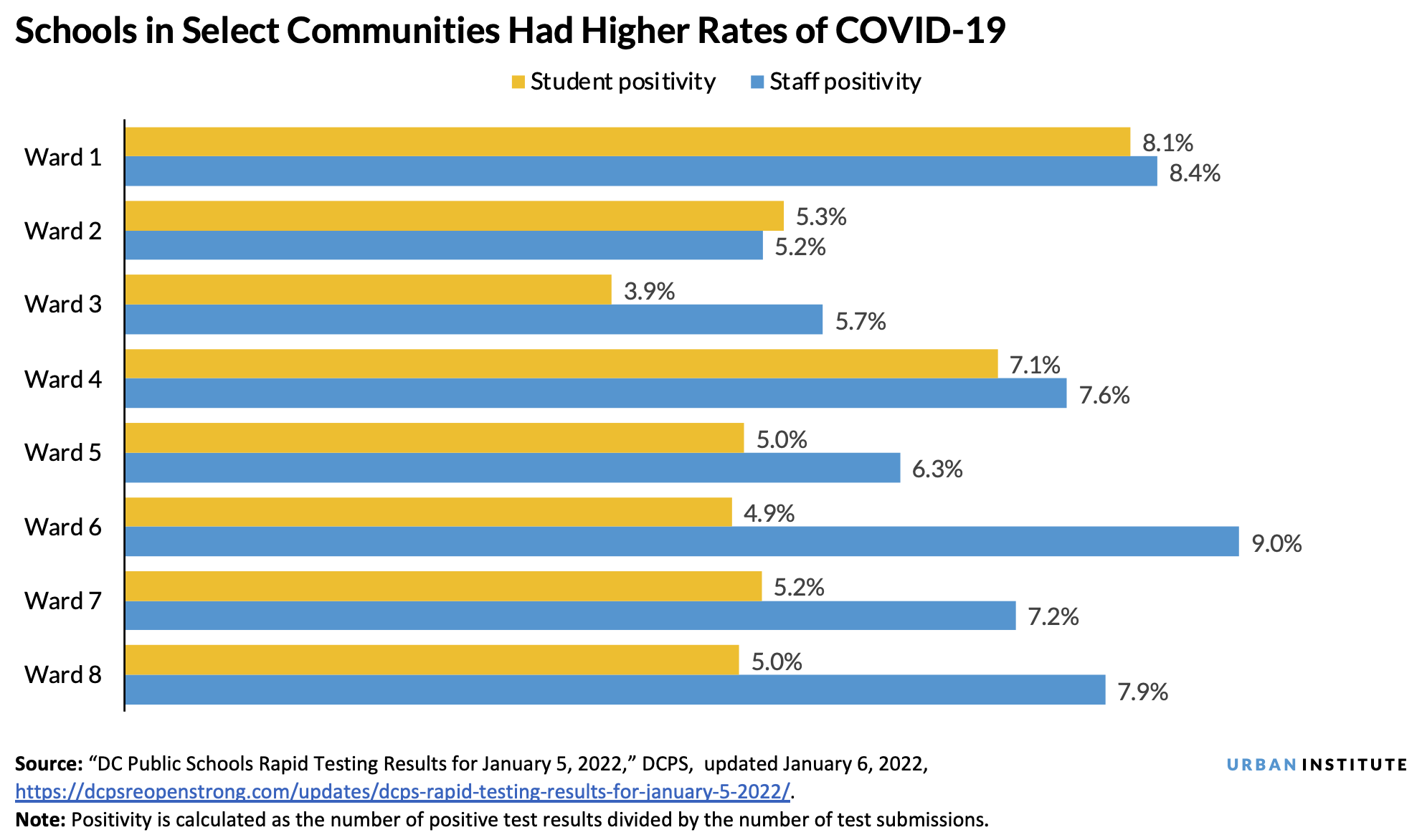 4. Testing is critical for safety and continuity of learning

In a demonstration last month in New York City, educator Kim Fritschy called for the DCPS test-to-return model by name. And just this week, the Biden administration announced it would make an additional 10 million tests and surge testing available to support safe in-person learning, with a priority for high-need school districts.

The DCPS test-to-return program mobilized a large-scale testing effort in a short period of time to the benefit of students, families, and school staff. And now, in line with guidance from the Centers for Disease Control and Prevention, DCPS is building on test-to-return with a test-to-stay program.

Testing can generate data to inform staffing, instructional models, and resource allocation and can help align public health and education efforts as the crisis continues. In a time of high stakes and hard choices, it’s a common sense solution that prioritizes safety and continuity for all.

** Disclaimer: Author is a DCPS parent.

There's no dearth of data in education, but data aren’t useful unless they’re timely, actionable, and accurate.