On June 19, 56 percent of Washington, DC, voters supported Initiative 77, a referendum that raises DC’s tipped minimum wage to the city’s standard minimum wage by 2026. Advocates for Initiative 77 argue that it will protect workers from wage theft and discriminatory tipping practices and raise their earnings, while opponents assert that it will drive up restaurant prices (for both owners and customers) and end up reducing workers’ wages.

Since the passage of Initiative 77, council members and Mayor Bowser have expressed interest in overturning the referendum. Supporters of the initiative are disproportionately lower-income residents and residents of color, and attempts to overturn it raise socio-political questions around the city’s responsiveness to constituencies that already feel like they are being left behind.

What do we know about the effects of raising the tipped minimum wage?

Currently, the standard hourly minimum wage in DC is $13.25, and the tipped workers’ minimum wage is $3.89. The law already mandates that employers cover any gap between wages plus tips and the standard minimum wage, so all tipped employees should earn no less than $13.25 an hour.

But servers’ median hourly wage (including tips) is only slightly higher than DC’s minimum wage, and tipped workers as a group are twice as likely as other DC employees to live in poverty. 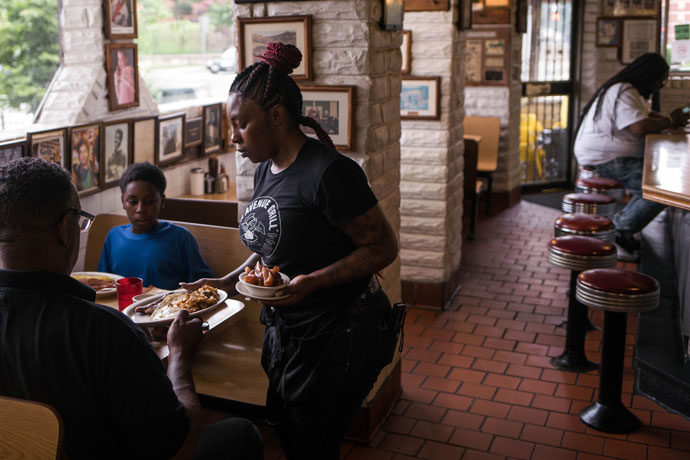 Server Donita Jackson runs food at the Florida Avenue Grill on Tuesday, July 31, 2018 in Washington, DC. The black-owned restaurant, which supported Initiative 77, has been a fixture in Columbia Heights since it opened in 1944. Photo by Maura Friedman/Urban Institute.

Extensive research on the minimum wage provides little guidance for anticipating the effects of Initiative 77. Standard minimum wage debates center on the trade-offs between potential job losses and higher wages, while tipped minimum wage policy focuses more narrowly on the mechanics by which wages are paid.

Support for Initiative 77 was concentrated among DC’s black, Hispanic, and lower-income voting precincts. Our analysis of American Community Survey and voting data shows that 89 of DC’s 143 precincts are majority black or Hispanic. In all 89 precincts, a majority voted in favor of Initiative 77, and the “yes” vote share grew as the black and Hispanic share of a precinct’s population increased. 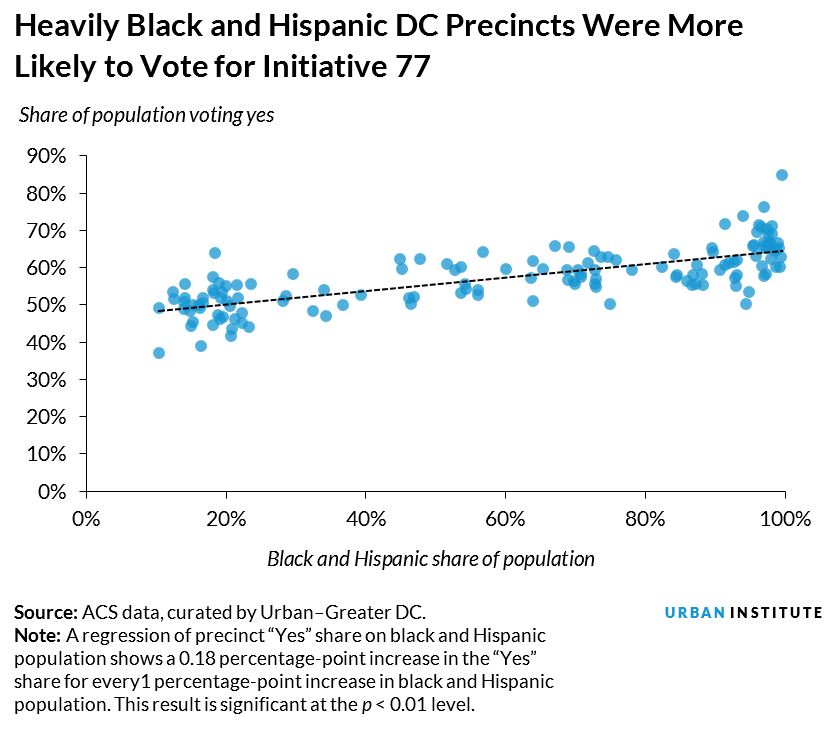 A similar pattern is true for lower-income residents. As the average household income of a precinct increases, the share of the precinct voting “yes” declines. 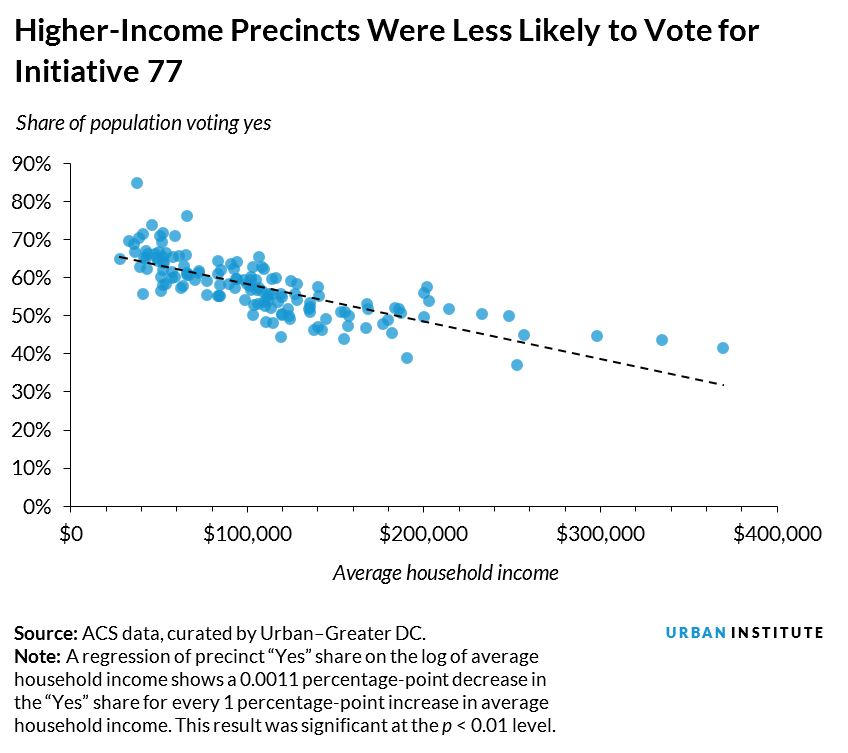 Why did nonwhite and lower-income people tend to vote for Initiative 77? Black and Hispanic workers in Washington, DC, earn much less than white workers. Across all occupations (not just tipped), 35 percent of black and 33 percent of Hispanic workers earn less than $15 an hour, compared with just 14 percent of whites. What’s more, nonwhite workers receive less in tips than do white workers. Initiative 77 could even the playing field, eliminating the need to rely on tips for wages and reducing the impacts of discriminatory tipping. 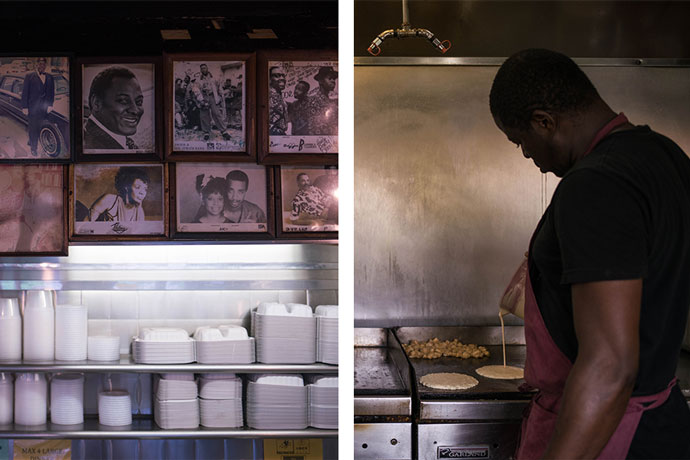 (Left) Photos of black celebrities and community leaders line the walls of Florida Avenue Grill. (Right) Niyi Alash prepares food food for customers on Tuesday, July 31, 2018 in Washington, DC. The black-owned restaurant, which supported Initiative 77, has been a fixture in Columbia Heights since it opened in 1944. Photo by Maura Friedman/Urban Institute.

How does this debate fit into broader concerns among DC residents?

In the recent Voices DMV survey, a Greater Washington Community Foundation initiative done in partnership with Urban, residents expressed concern that rapid gentrification could leave some people behind, particularly residents of color and lower-income people.

In the survey, which gathered insight from residents of the District as well as nearby Maryland and northern Virginia, white people were more than twice as likely as other groups to say they were living comfortably. Fear of displacement also weighs heavily on many of the city’s lower-income residents and residents of color; nearly one in three survey respondents said they knew someone who had to move out of their jurisdiction in the past two years for a reason other than their own choice.

DC’s history of making development decisions that enforce or preserve racial segregation has resulted in black and low-income residents’ mobility trailing the rest of the city. Experts have called on city leaders to adopt an equity lens and ensure that all communities share the prosperity the DC region enjoys. 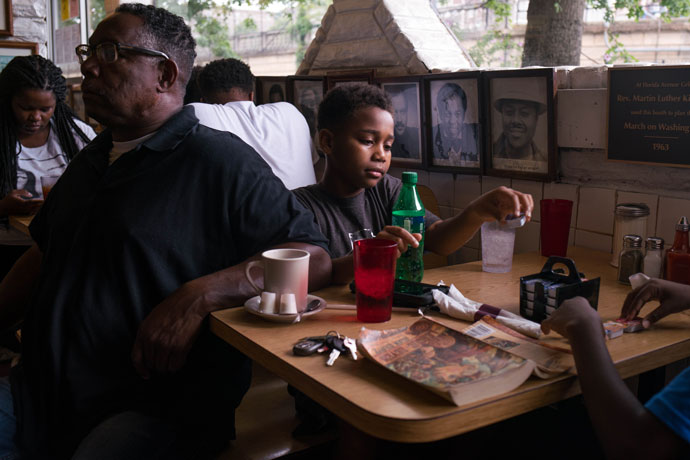 Desmond Gonzalez, 10, plays with jam packets ahead of his family's breakfast at Florida Avenue Grill on Tuesday, July 31, 2018 in Washington, DC. The black-owned restaurant, which supported Initiative 77, has been a fixture in Columbia Heights since it opened in 1944. Photo by Maura Friedman/Urban Institute.

But lower-income and nonwhite residents’ outsized support for Initiative 77 combined with avid opposition by wealthy industry groups may speak to research that shows policymakers are more likely to listen to wealthy constituents and organized business interests.

As city leaders continue to wrestle with a repeal of Initiative 77, they must understand who voted for the bill, who voted against it, and the competing interests at play. Overturning approval of the legislation may send a message to DC’s black, Hispanic, and lower-income residents that their political voice has less influence than organized business interests and exacerbate their concerns that DC’s rapid gentrification could result in city leaders failing to prioritize their needs.