Despite the law, landlords still reject voucher holders in DC

Concerns over gentrification and high housing costs have plagued the Washington, DC, area for years. DC is one of the most expensive places in the US to live, and, much like everywhere else in the country, the supply of affordable housing isn’t keeping up with demand.

There are nearly 50,000 extremely low–income households in the District. But even with federal assistance, affordable housing is available to less than half of them (without federal assistance, that share would fall to 12 percent). And nearly 7,000 people experienced homelessness in DC this year.

Housing Choice Vouchers, issued by local public housing authorities (PHAs) under the US Department of Housing and Urban Development (HUD), aim to help low-income renters ease that financial burden and find decent, affordable housing. But there aren’t enough vouchers to go around.

In DC, the waiting list for a voucher has been closed to new families since 2013, and as of May 2015, there were more than 41,000 families on the waiting list. Even after a family receives a voucher, they still have to find an available unit where the landlord accepts their voucher, and that is no easy feat.

In a new Urban Institute report, funded by HUD, we found that many landlords routinely reject voucher holders before meeting them, even though the assistance voucher holders receive guarantees that a share of the rent will be paid. Our testers mirrored the search process for voucher holders—sifting through ads to find a suitable unit and calling landlords to ask if they accepted vouchers. In most sites in our study, hearing “no” was common.

But DC had, by far, the lowest denial rate of the five sites we studied despite being the most expensive market (Los Angeles was a close second). The city’s laws protecting voucher holders and the DC PHA’s payment standards could have led to DC’s lower denial rate. But DC could improve enforcement of its laws and provide better incentives to landlords to participate in the voucher program.

How DC landlords’ acceptance of voucher holders compares with other cities 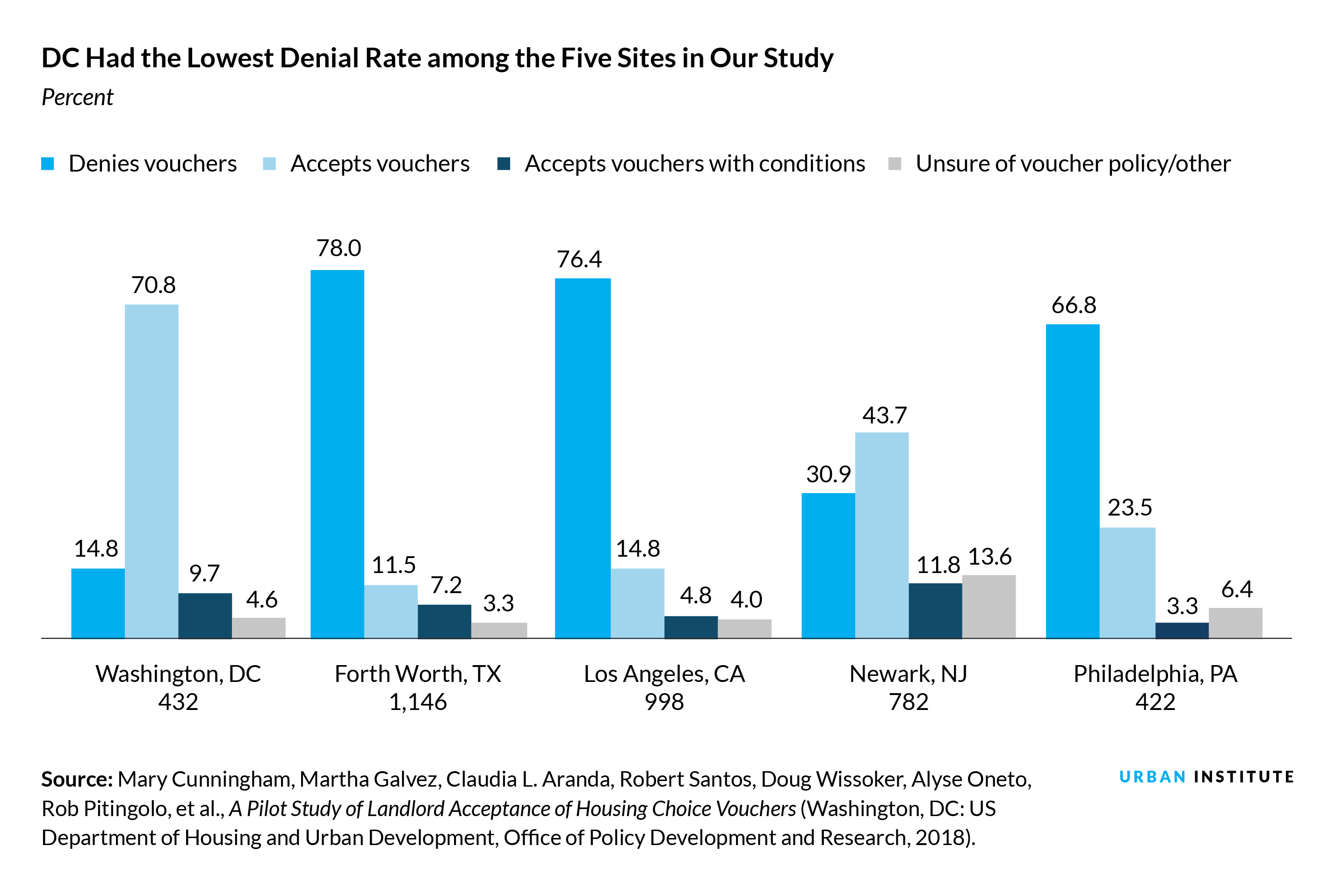 But DC’s results weren’t all good news, and there are reasons to believe our estimates for DC may be missing some types of discrimination. Beyond the 15 percent that denied voucher holders, another 14 percent of landlords either said they were unsure about their policy or said they accepted vouchers with conditions. These landlords may have been genuinely unsure of their policy, may have placed conditions on all apartment seekers that automatically rule out voucher-holding tenants, or may have been passively denying voucher holders.

We also did not go beyond the initial stage of testing in DC to the paired testing. DC landlords could have discriminated against voucher holders later in the process after agreeing to accept their voucher on the phone—for example, by standing up voucher holders for in-person appointments more often than their counterparts without one. Our testers also did not reflect the racial makeup of the DC Housing Authority’s voucher program, so the results do not account for any potential racial bias of landlords talking with prospective tenants. Therefore, DC’s overall denial rate could be a conservative estimate.

On a positive note, unlike other sites, DC was the only site where landlords were not substantially more likely to deny voucher holders in low-poverty areas compared with high-poverty areas. Moving to these types of neighborhoods allows low-income families to improve their lives—a key goal of the Housing Choice Voucher Program.

In the other four cities in the study, voucher holders who wanted to find housing in these “opportunity” areas faced even more rejection. Despite the fact that we didn’t find differences in rejection rates by neighborhood, most voucher holders in DC still live in higher-poverty and highly racially segregated neighborhoods. 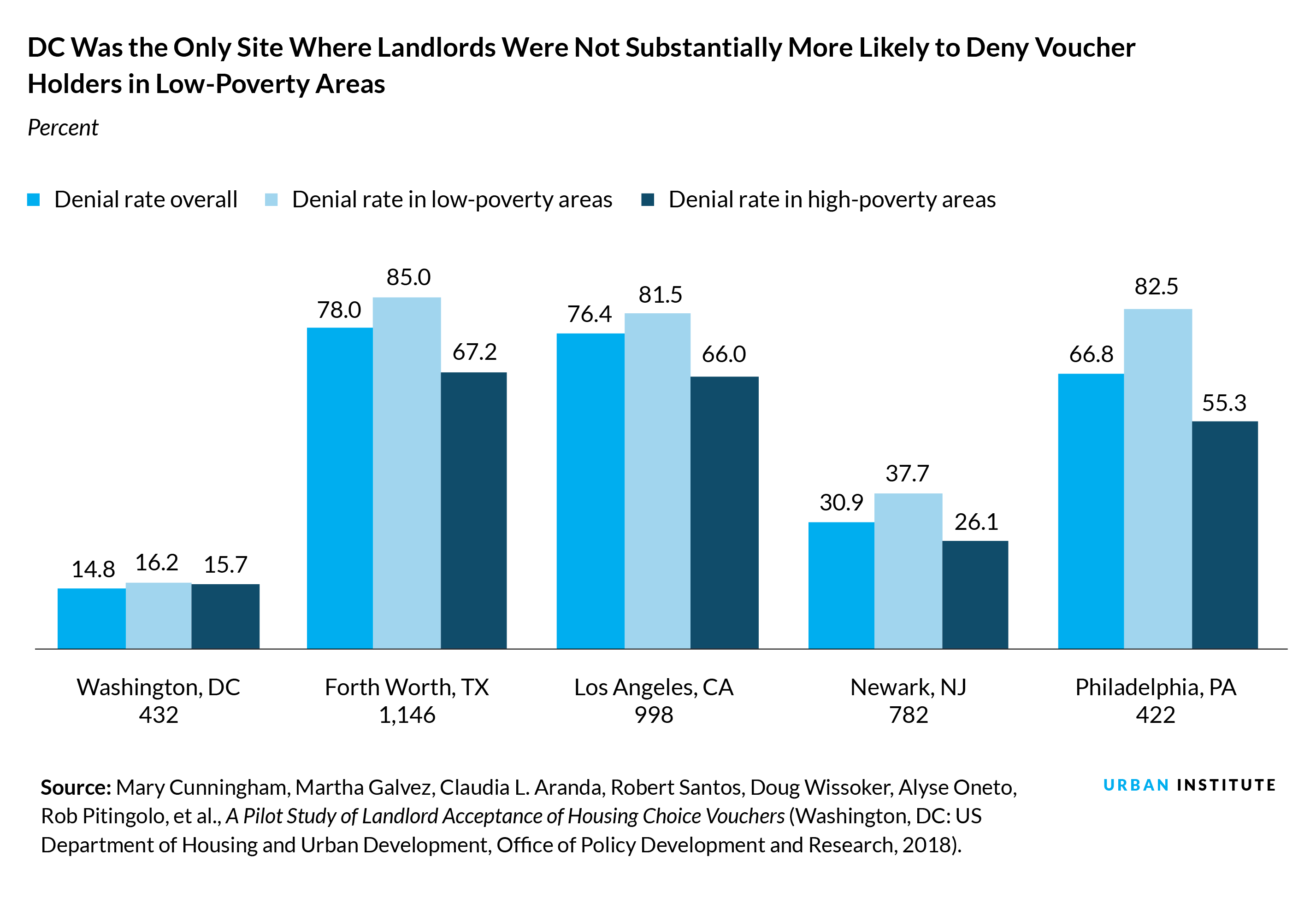 Why were landlords in DC less likely to deny voucher holders than in other cities?

Although we can’t draw conclusions about why denial rates varied by site, one factor contributing to the DC area’s lower denial rate could be the source-of-income protections passed in Montgomery County in 1991 and in Washington, DC, in 2005. These laws prohibit landlords from discriminating against renters for using a voucher to pay a portion of the rent. The site in our study with the second-lowest denial rate, Newark, New Jersey, also has these protections in place.

But the fact that 15 percent of landlords in DC rejected voucher holders despite the law (and another 14 percent were unsure or required more information) suggests that these protections could be better enforced. The Equal Rights Center has conducted similar smaller-scale testing studies in DC. Although it found denial rates fell after the city enacted source-of-income protections, a significant portion of voucher holders still face discrimination from landlords.

What can DC learn from these findings?

Our findings in DC are a good sign that landlord discrimination against voucher holders is less common than in other areas and that landlords aren’t as likely to deny voucher holders access to higher-opportunity neighborhoods as in the other cities in this study. But the fact that only 70 percent of landlords accepted vouchers outright shows there is still work to be done.

Greater enforcement of the city’s source-of-income laws could ensure landlords don’t illegally discriminate against voucher holders. Policymakers should also test ways to boost participation by making the program more attractive and more efficient for landlords. Strategies include providing cash incentives or bonuses for landlords to accept vouchers and improving customer service, such as ensuring the PHA pays the rents on time and conducts efficient and timely unit inspections.

In DC, where the waiting list for voucher assistance has been closed since 2013, the opportunity for a low-income family to use a voucher doesn’t come around often. When it does, they should be able to use that voucher for its intended purpose—finding decent housing in a good neighborhood where they have the chance to improve their lives.