DC’s Population Growth Has Affected the Racial and Ethnic Composition of Wards 6, 7, and 8

Recently, DC experienced significant large-scale development in Navy Yard and the Wharf. This space was only available because a federal urban renewal project in Southwest DC demolished 99 percent of the buildings and displaced 4,500 Black households.

Past disinvestments make communities like the Wharf and Navy Yard ripe for new development and gentrification. This, in turn, affects the racial composition of neighborhoods, which influences residents’ experiences.

Historical and present-day policies rooted in structural racism, such as zoning, affect where and how DC’s population grows and changes. Evidence shows neighborhoods where people of color predominantly live in DC—particularly Black communities—often face public and private disinvestment and staggering wealth disparities. In Wards 7 and 8, east of the Anacostia River, the effects of the decline in public and private investments from 1950 to 1970  continue today despite wins from community activists to improve infrastructure and transportation access.

My analysis of demographic data and ward boundary shifts shows that in the past decade, Ward 6 experienced an influx of white residents because of increased housing production. That population growth shifted Wards 7 and 8’s boundaries, and they now include a greater share of white residents.

East-of-the-river residents still make up a majority of the populations in Wards 7 and 8. But the population changes could affect the long-term political representation of Ward 7 and 8 and their Advisory Neighborhood Commissions (ANCs), ultimately shifting voting power to white, wealthier residents across the river. Ensuring long-standing Black residents aren’t displaced and can shape decisions for their own communities is vital to meeting their needs.

Washington, DC, experienced its first population growth in 50 years from 2000 to 2010 and continued to grow from 2010 to 2020. However, this growth was unequal across DC’s eight wards.

Because of the boundary changes, Ward 8 now extends across the Anacostia River into Navy Yard for the first time; Ward 7 encompasses Kingman Park and Hill East, the neighborhoods in-between Capitol Hill and the Anacostia River; and Ward 2 includes part of Shaw north of New York Avenue. 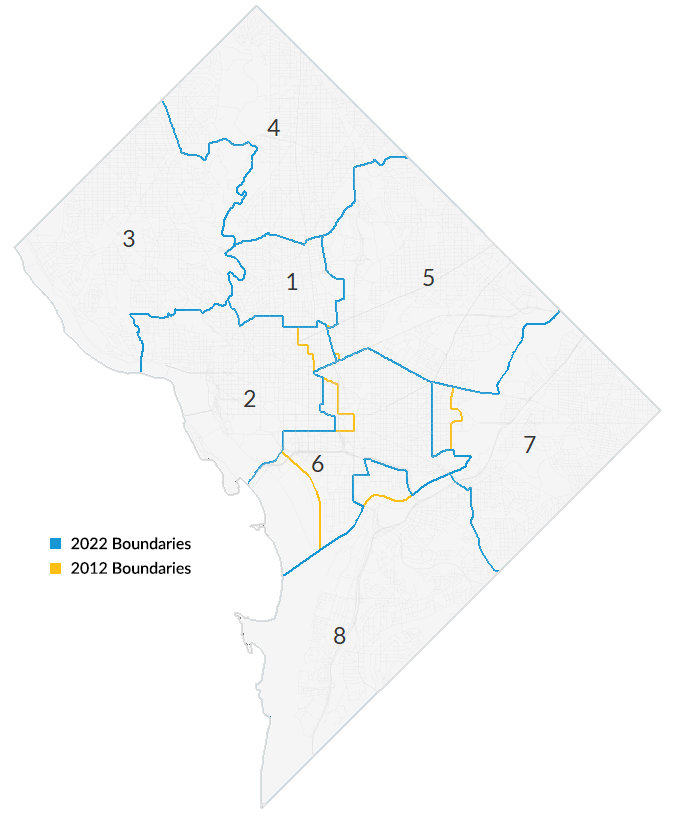 Source: DC Open Data.
Notes: Boundaries from 2012 are in yellow. 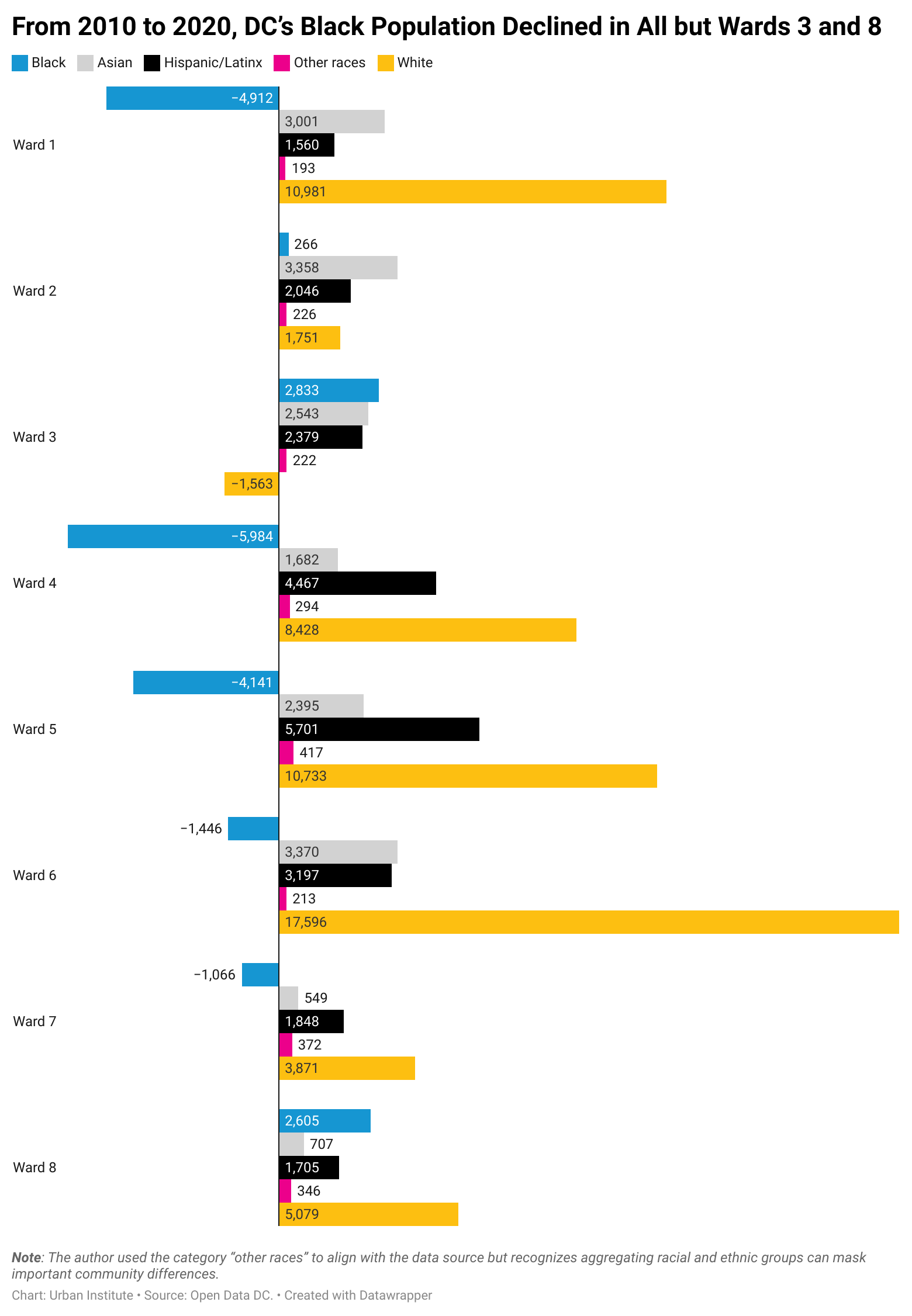 Because Navy Yard was added to Ward 8, Ward 8 experienced a decrease in the share of Black residents it would have had (it has 85.1 percent, compared with the 90.5 percent of Black residents it would have had) and an increase in white residents (Navy Yard’s population is primarily white). White residents now account for 9.3 percent of Ward 8’s population compared with 4.7 percent with the previous boundaries.

Similarly, the share of Black residents in Ward 7 decreased further because new areas of Hill East, a majority-white neighborhood, were redistricted to Ward 7.

Zoning changes, public housing redevelopment, public-private partnerships, and development around Nationals Park, NoMa, and Navy Yard have fueled housing production and population growth in Ward 6, attracting white, wealthier residents. As a result, the boundaries of Ward 8, where population growth was slower because of systemic racism and economic disinvestment, spanned west of the Anacostia River into Navy Yard for the first time.

Though Black residents in neighborhoods east of the river largely still represent Ward 7 and 8 and their ANCs, ensuring long-standing community residents shape decisions for their neighborhoods and wards is vital to meeting local priorities and needs.

Local policymakers, developers, and foundations have a few options to help, including the following changes in housing policy and anti-displacement measures.