With the COVID-19 crisis leaving millions of Americans out of work, many renters face the prospect of not being able to pay another month’s rent. Calls for extended unemployment benefits, fully funded rental assistance, and national eviction moratoria have become major policy proposals to contain a probable and daunting surge in housing instability and homelessness.

But as states and localities consider how to protect vulnerable renters, it’s important they remember the country’s long-standing affordable housing crisis that left millions of Americans rent burdened, even when the job market was strong. Building resilience into our communities to withstand future shocks will take more concerted action toward making rent more affordable so families can devote less to rent and more to savings, food, and medical costs. Although there are many visions for how to do this, trends in Montgomery County, Maryland, deserve more exploration. 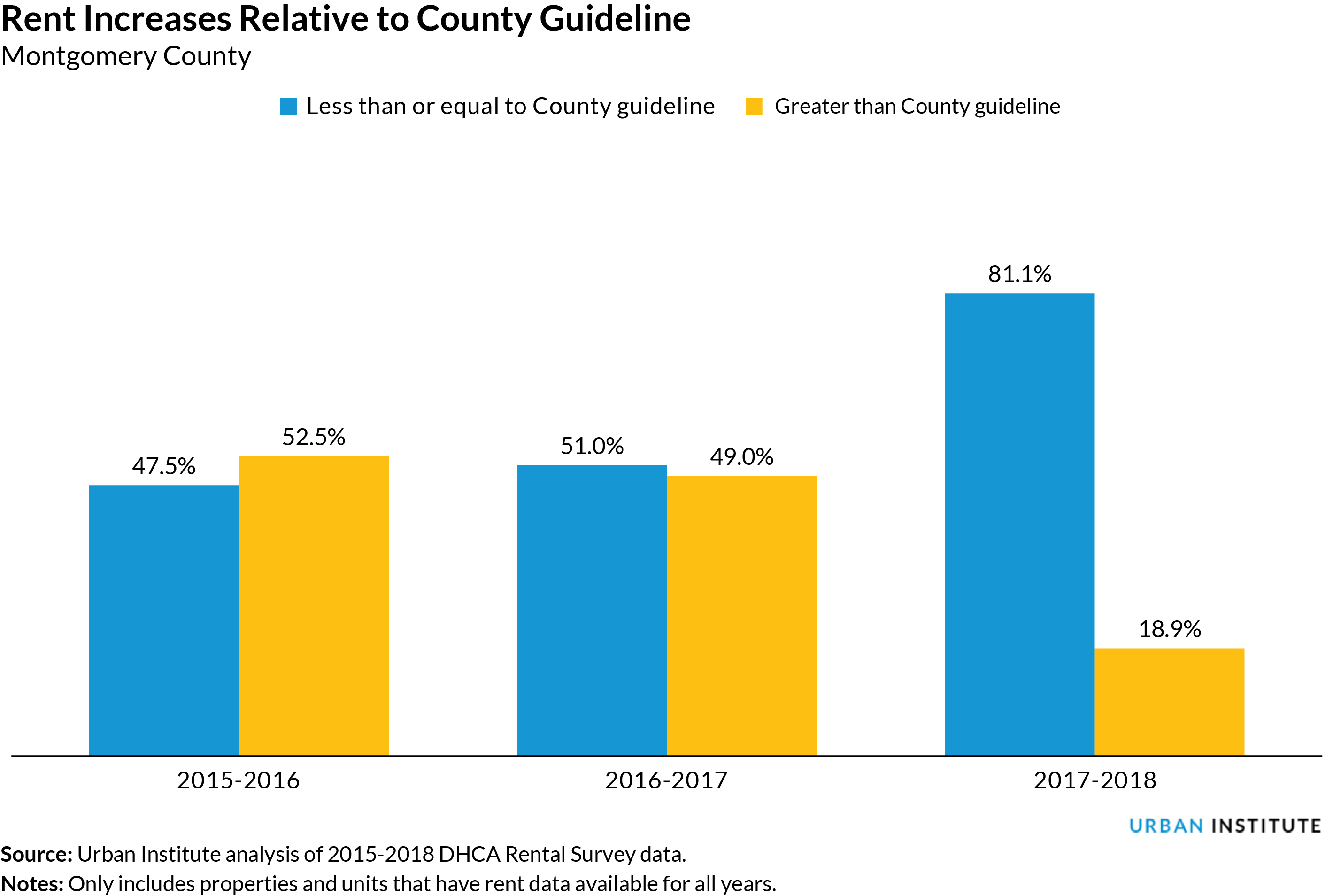 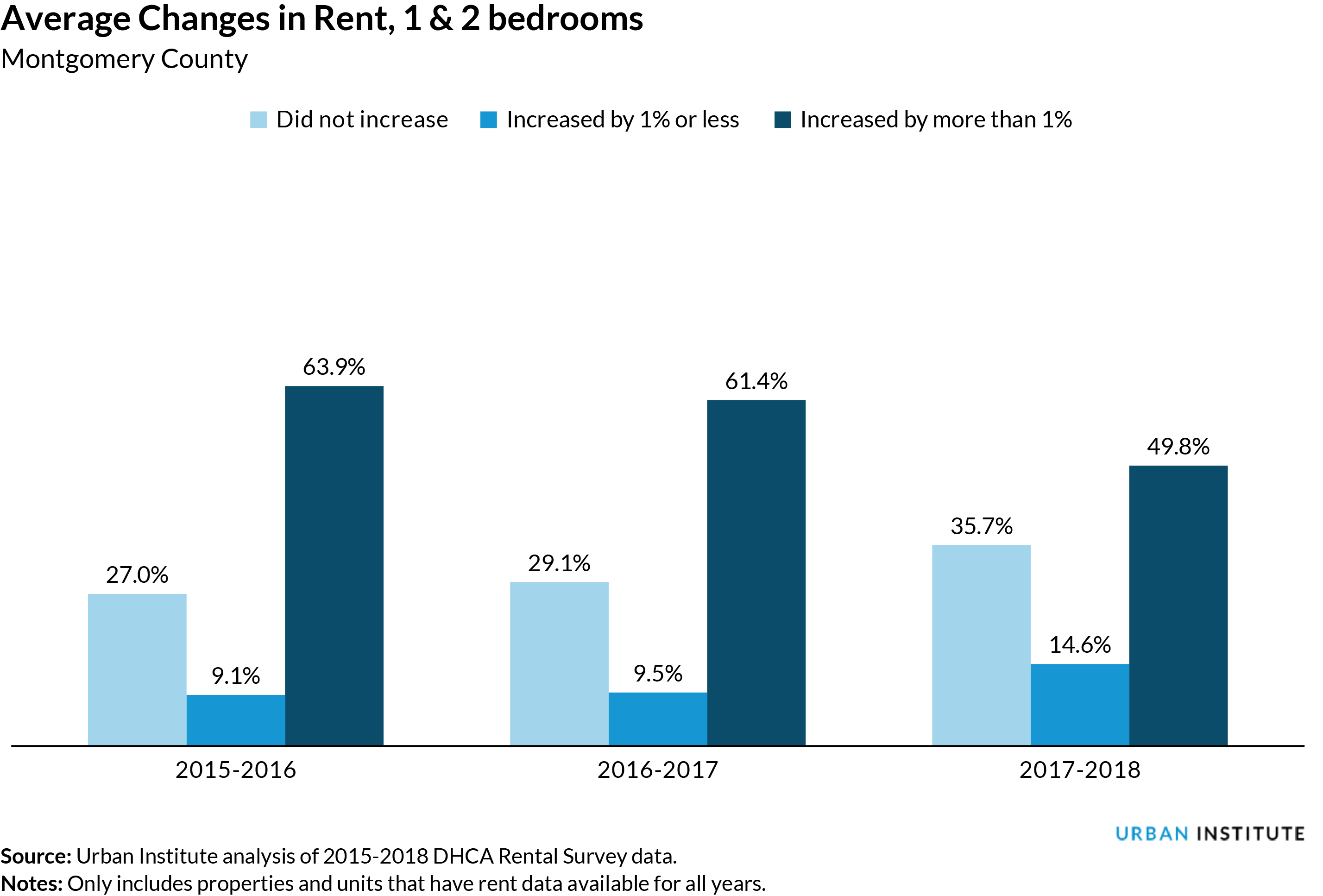 Aggregate supply and demand for rental housing, the usual explanations for changes in rent prices, do not line up with the data on stabilizing rents.

Demand for rental housing in Montgomery County has not subsided at all. As the county’s population increased by more than 76,000 people between 2010 and 2018, the share of renters in the county has steadily increased. Less than 31 percent of Montgomery County housing was renter occupied in 2010, a figure which rose to almost 35 percent by 2018.

Rental housing supply, while increasing, does not seem to be stabilizing rents. County data show the number of rental units increased by 13,152 units between 2015, the first year for which data are available, and 2017, but the rental vacancy rate has barely budged. Between 2015 and 2018, the rental vacancy rate only went from 3.9 percent to 4.2 percent, well within the margin of error.

A separate explanation for stabilizing rents is tenant rights policy. Before March 2017, when Bill 19-15 became law, landlords in Montgomery County were only obligated to give renters two months’ notice of a rent increase—the same amount of time renters are required to notify landlords of their intent to move out. That left renters with little time to make an informed decision on the costly choice to move or stay.

Bill 19-15 extended the minimum notice of a rent increase to 90 days, giving renters a month to decide whether to move after notice of rent increase. That additional time matters because landlords have much more information than their tenants about rents and rent increases—and that dynamic can drive up prices. When renters have time to get more information by looking for comparable units and comparing rents, they can have a much better sense of whether their rent increase is competitive or if they would be better off moving.

Montgomery County rent data alone are insufficient to say this policy change caused the widespread drop in rent increases, but evidence from behavioral science supports its plausibility. Behavioral science suggests people generally will hold onto what they have instead of taking a gamble they might lose. Tenants having additional time to decide whether to move out in the face of a rent increase raises the risk for landlords that tenants will leave. Landlords would likely rather hold onto good tenants—and the steady rent from continuously leased units—than risk the profit-lowering cost of an unoccupied unit while waiting to lock in new tenants at a much higher rent.

Still, our analysis raises more questions than it answers. The empirical research on rent stabilization strategies that don’t rely on price ceilings like Montgomery County’s is very thin, and the economic theory we have only suggests dynamics we may be observing. We don’t have empirical evidence to say whether landlords made conscientious decisions in response to the new legislation or if landlords’ compliance with the law changed tenants’ behavior and rents fell in response. We also don’t know whether unit turnover increased and put downward pressure on prices or if new rental housing was built in a market segment that could have an outsize effect on prices.

But the limitations of our analysis undeniably point to a need for more research. Small, reproducible changes in policy—like notice requirements—may have significant implications for housing affordability for renters, but we need much more evidence to be sure.