Are Opportunity Zones in the Greater DC area targeted to communities in need of investment?

Because of a coding error in the “Characteristics of Opportunity Zone Designations” table, the shares of DC/MD/VA/WV residents age 25+ with a bachelor’s degree or higher were incorrect in an earlier version of this blog post (corrected 7/12/18).

The Greater DC region has experienced significant economic growth. Although this growth has strengthened the region as an economic engine, it has also led to a housing affordability crisis and concerns of displacement layered over long-standing racial inequities.

Enter the Opportunity Zones program, created as part of the recently passed Tax Cut and Jobs Act. The program gives capital gains tax breaks to corporations and individuals investing in eligible (usually low-income) areas. With the potential to be the nation’s largest economic development program, it could herald remarkable growth and bring new capital to historically excluded areas.

Our new brief examines selections for each of the 50 states, DC, and territories under this program. This blog post examines the 441 census tracts across the District of Columbia, Maryland, Virginia, and West Virginia that governors and the DC mayor selected to be Opportunity Zones, out of more than 1,800 eligible tracts. Of these, 112 are within the Washington, DC, metropolitan area. A subset of these tracts is shown below. 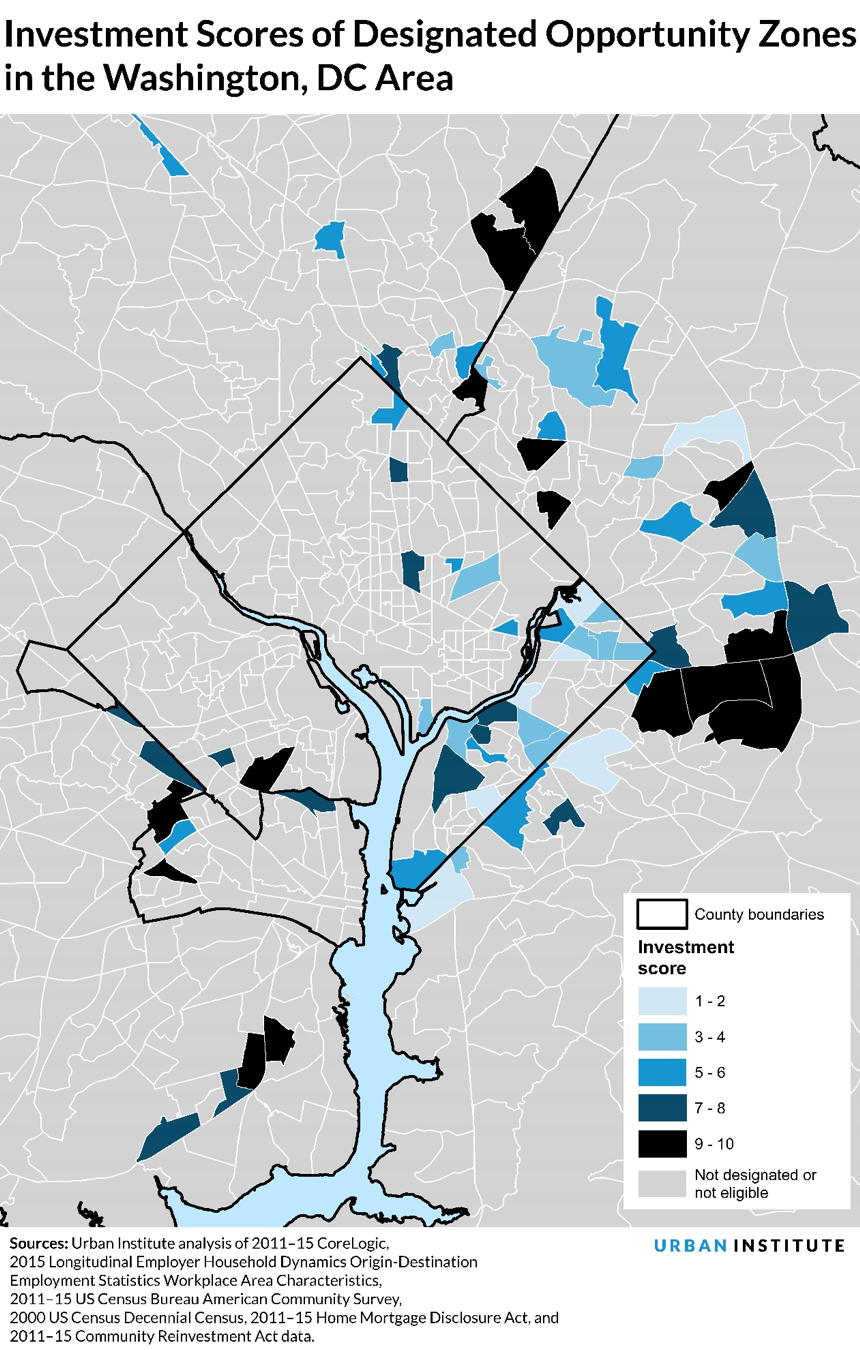 To analyze these selections, we compiled two measures—an investment score and a flag for socioeconomic change—to compare designated and nondesignated eligible tracts. Tracts already receiving sizable investments are less likely to need help than tracts not receiving investments. And given how flexible the incentive is in terms of what projects it supports, selecting gentrifying tracts could exacerbate housing unaffordability and displacement.

We ranked all tracts eligible for designation in the region by current level of commercial, multifamily, single-family, and small-business investment received on a scale from 1 (lowest) to 10 (highest). The figure below shows scores for tracts designated as Opportunity Zones in the Washington, DC, metropolitan area.

More than 44 percent of the Opportunity Zones designated in the Greater DC region already receive high levels of investment, scoring 8 or above on the investment score measure. Conversely, only 13.5 percent of tracts selected scored 3 or below, indicating underinvestment.

As all designated zones are placed on an even tax benefit pedestal, the new tax benefit could flow toward investments that would have occurred without the new incentive. Moreover, these flows risk being diverted to areas with strong access to capital, as market forces will still ultimately dictate investment decisions, and areas with high levels of investment often carry low risk. 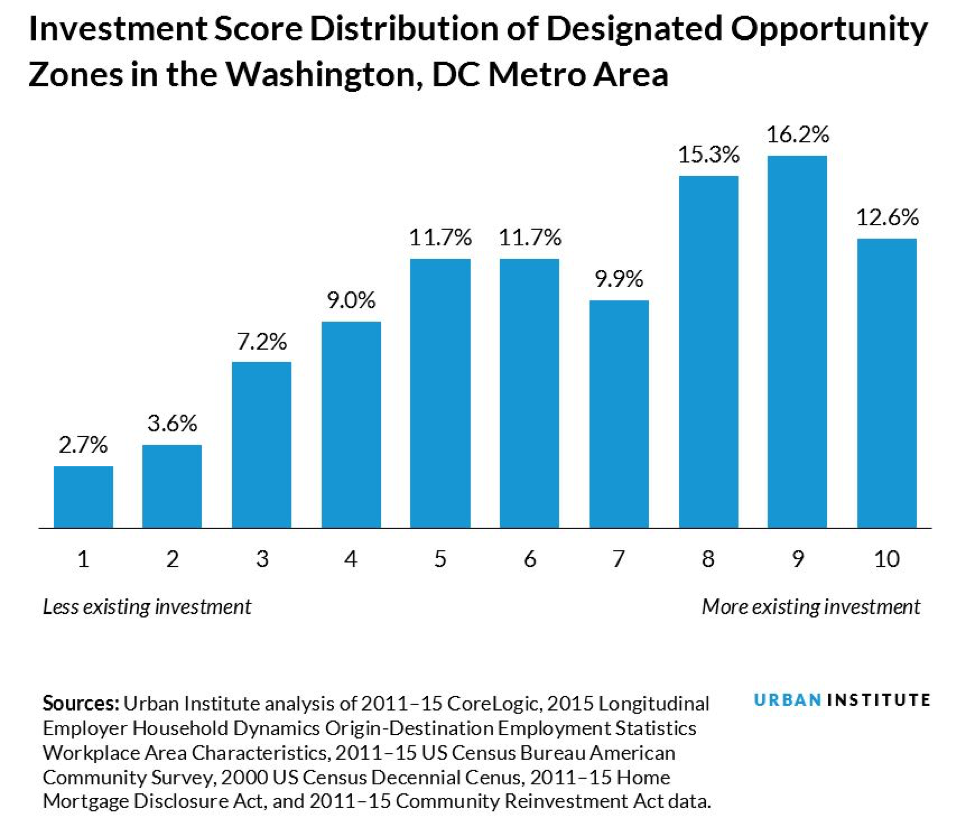 Increasingly, DC and its surrounding areas have experienced gentrification and displacement pressures. To understand how Opportunity Zones relate to this, we created a socioeconomic change measure that flags tracts that experienced substantial change between 2000 and 2016 in the share of residents with a bachelor’s degree or higher, median family income, share of non-Hispanic white residents, and average housing burden.

Of the 112 tracts designated within DC and its surrounding metropolitan region, 9.8 percent (11 tracts) saw significant socioeconomic change by our measure (table below), versus 13.9 percent of eligible tracts in the DC region. (Our measure captures where changes have already happened, not communities that are at risk.)

This indicates slight targeting away from tracts that experienced substantial change in recent years, though still a significant amount selected. (Nationally, just 3.2 percent of designated tracts saw significant socioeconomic change by our measure.)

Of these, a few selections are concerning, including DC neighborhoods like LeDroit Park (east of Columbia Heights, south of Washington Hospital Center), the Southwest neighborhood (adjacent to Navy Yard), Brentwood, Edgewood, and Historic Anacostia. Associated development can undermine community objectives to preserve and maintain affordable housing, and it could push out low- and moderate-income residents rather than allow them to benefit from new amenities.

Beyond access to capital and socioeconomic change in its aggregate, we also considered economic, housing, demographic, and education factors to determine how much the designated tracts were targeted on these measures. Tracts designated in the DC region were worse off economically and on educational attainment than eligible nondesignated tracts (though still better off than those designated in surrounding states). 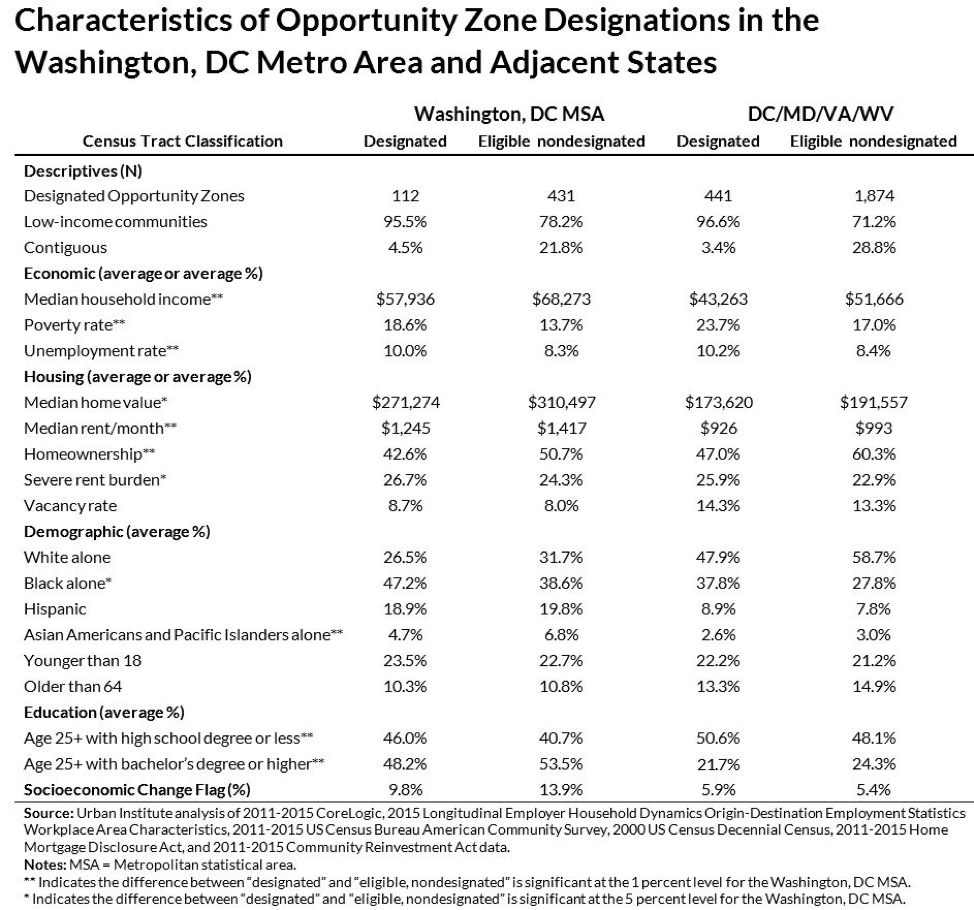 With designated Opportunity Zones locked in for the next 10 years, it is up to the public and private sectors across the Greater DC region to ensure that greater levels of investment positively affect residents at all income levels.

How does the DC region rank on inclusion and shared prosperity?

The Greater DC area is thriving, but not all residents are sharing in the region’s economic prosperity. Deep contrasts exist between populations, neighborhoods, and jurisdictions.